© UNHCR/Fauzan Ijazah
Thirty-one-year-old earthquake survivor, Mega (left) and her husband, search through the wreckage of her childhood home in Petobo village, Palu, in the Indonesian island of Sulawesi. 16 October 2018.
19 October 2018
Humanitarian Aid

More emergency shelter supplies and relief for thousands of victims of Indonesia’s recent earthquake and tsunami is set to arrive on the island of Sulawesi in the coming days, the UN refugee agency (UNHCR) said on Friday, amid reports from staff that the devastation is “beyond imagination”.

Three weeks since disaster struck, it is estimated to have killed more than 2,000 people, displaced 80,000 and destroyed nearly 70,000 houses. At least 680 individuals remain unaccounted for, UNHCR says.

In addition to the tremors and tidal waves, huge landslides turned the ground into liquid mud which washed over large areas. 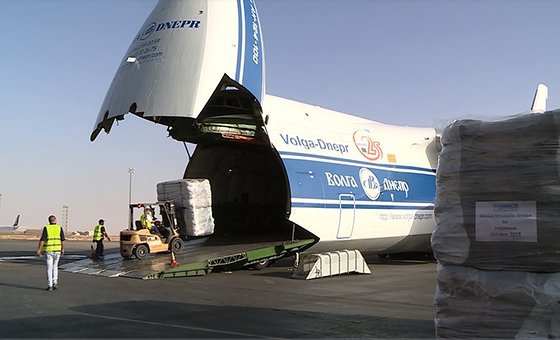 UNHCR airlifted a shipment of 1,400 emergency tents to Indonesia to meet the ongoing needs for survivors of last month's deadly earthquake and tsunami in Sulawesi.​​​​​​​@UNHCR/Muhammad Assad

“Our staff described the effects of the earthquake and tsunami as ‘beyond imagination’ and ‘devastating’,” said Charlie Yaxley, spokesperson for UNHCR in Geneva. “Communities have seen their houses, schools and hospitals reduced to rubble. Entire villages have been decimated.”

Mr Yaxley confirmed that UNHCR had delivered 435 tents to the hub at Balikpapan airport, on the neighbouring island of Borneo earlier on Friday. The relief items were delivered to Indonesian authorities, which assisted with transferring them to Sulawesi.

Another 1,305 tents will be delivered to Balikpapan in “the next few days”, he added, noting that this initial consignment will provide “much-needed shelter” to around 6,500 of the most vulnerable.

Far more material and psychological assistance will be required, however, and additional emergency tents, sleeping mats, mosquito nets and solar lamps will be delivered in the coming weeks.

“There remains a strong resilience, with people helping each other where they can and simply by sharing their stories,” Mr Yaxley said. “One woman said that she felt ‘lucky’ that she had only lost her father, and that her husband and son had survived.”

The World Food Programme (WFP) is also assisting with the relief effort after installing storage facilities at Palu airport in Sulawesi in early October.

Another 10 “mobile storage hubs” are being set up around Palu and Donggala “to ensure the smooth flow and distribution of aid to where it is needed”, WFP said in a statement.

“WFP is due to have 40 trucks in operation in and around Palu by 20 October,” said spokesperson Hervé Verhoosel. “These trucks will be available to all partners through a common services agreement for transporting and distributing aid.”

Palu in Central Sulawesi, is one of the worst-hit areas. Earlier this week, UNHCR staff went there to coordinate with local government and partners. In Petobo and Balaroa, “many people have not only lost their home, but even the land on which it once stood”, Mr Yaxley said.

In answer to a question about aid workers’ access to Sulawesi, the UNHCR spokesperson insisted that the Government of Indonesia and humanitarian workers had been working “tirelessly” as first responders in the affected areas.

“The Government is leading the response and they are coordinating that,” he said. “It’s Indonesian aid staff who are leading that as well. Our staff were on the ground earlier this week and they’ve had no issues with access to the affected areas.”

♦ Receive daily updates directly in your inbox - Subscribe here to a topic.
♦ Download the UN News app for your iOS or Android devices.
Indonesia|tsunami|earthquake