The Prosecutor mandated to oversee the Occupied Palestinian Territory for the International Criminal Court (ICC) stated on Wednesday that her office is keeping “a close eye” on the planned demolition of a Palestinian village in the West Bank by Israeli authorities, warning that, according to international law, it could constitute a “war crime”.

“I have been following with concern the planned eviction of the Bedouin community of Khan al-Ahmar, in the West Bank,” said Prosecutor Fatou Bensouda, noting that “evacuation by force now appears imminent” and could result in “further escalation and violence”.

Approximately 190 herders, half of whom are children, live in Khan al-Ahmar, a village located in the outskirts of East Jerusalem. According to the UN Office for the Coordination of Humanitarian Affairs (OCHA), the village is one of dozens affected by an Israeli settlement reorganization plan that would create a continuous built-up area from East Jerusalem to Jericho.

“The problem if it happens in all of these [villages], is that then the contiguity and the possibility of a two-State solution will be challenged because the West Bank will be cut in half,” Jamie McGoldrick, the UN Humanitarian Coordinator explained to UN News in an interview on Tuesday.

“It bears recalling, as a general matter,” said the ICC Proscutor, “that extensive destruction of property without military necessity and population transfers in an occupied territory constitute war crimes under the Rome Statute.”

According to OCHA’s latest Protection of Civilians report, over 300 Palestinian-owned structures have been demolished in 2018 alone.

“I continue to keep a close eye on the developments on the ground and will not hesitate to take any appropriate action, within the confines of the independent and impartial exercise of my mandate under the Rome Statute, with full respect for the principle of complementarity,” she stated.

The complementarity principle on which the ICC is based entails that the ICC can only investigate and prosecute core international crimes when national jurisdictions are unable or unwilling to do so genuinely. 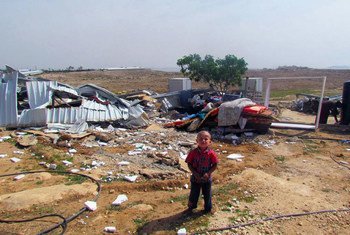 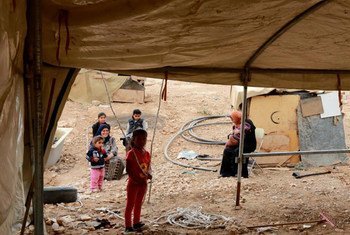 A Palestinian Bedouin community is under threat from a demolition order within days, to make way for Israeli settlement expansion, the UN human rights office, OHCHR, warned on Tuesday.