© UNHCR/Pumla Rulashe
Congolese women and children arrive at a border point in Chissanda, Lunda Norte, Angola after fleeing militia attacks in Kasai Province, Democratic Republic of the Congo. 2 May 2017.
16 October 2018
Migrants and Refugees

Congolese nationals forced back across the border to the Democratic Republic of Congo (DRC), after being expelled from neighbouring Angola, “are returning to a desperate situation,” a UN Refugee Agency (UNHCR) spokesperson said on Tuesday.

Speaking at a media briefing in Geneva, the spokesperson said that the agency is concerned by a “fast-developing humanitarian situation in the Kasai region” of the DRC, where the situation is already fragile: around 200,000 people have arrived over the last two weeks.

The mass population movement follows the Angolan Government’s decision to expel Congolese migrants, many of whom were working in the informal mining sector in the northeast of the country.

The deadline for expulsion expired Monday and, within some areas of Angola, there have been reports of violent clashes between migrants and law enforcement agents. Thousands have been arriving at the border, where complaints have included sexual violence and harassment, bodily frisking and theft of belongings – at the hands of security forces on both sides of the border.

The prospects for the returnees are bleak: they have limited means to travel to their home regions, in an area hit by recent conflict and destruction, and where ethnic tensions are still high.

The UNHCR spokesperson reported over-crowding in the town of Kamako in Kasai Province, on the Angola border, with people staying overnight outdoors, in host families, church compounds, and on the streets.

The spokesperson pointed out that mass expulsions are contrary to country obligations under the African Charter on Human and Peoples’ Rights and that the Agency is asking Angola and DRC to work together to ensure a safe and orderly population movement, and to respect the human rights of those affected.

♦ Receive daily updates directly in your inbox - Subscribe here to a topic.
♦ Download the UN News app for your iOS or Android devices.
DRC|Angola|UNHCR 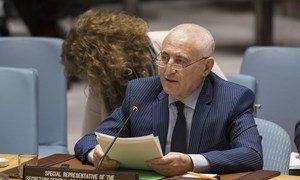 The United Nations High Commissioner for Refugees (UNHCR) today announced plans to construct a new camp for persons fleeing from the Central African Republic to the neighbouring Democratic Republic of the Congo (DRC).