UNHCR/N. Wright
At a social centre for refugees on Nauru, where they are held, conditions are basic. (file)

Australia should end its offshore processing policy on the Pacific islands of Nauru and Papua New Guinea amid reports of widespread, acute mental distress and attempted suicide by children and young adults, the UN refugee agency, UNHCR, said on Friday.

“In one of the various cases brought to our attention during September, a suicidal pre-teenage girl remains in Nauru despite doctors’ advice to the contrary,” UNHCR spokesperson Catherine Stubberfield told journalists in Geneva. “Medical records seen by UNHCR staff show she first doused herself in petrol, before attempting to set herself alight and pulling chunks of hair from her head.”

According to UNHCR, more than 1,400 people are still being held on both islands, which have hosted Australia-bound migrants and asylum-seekers forcibly transferred there, since 2013.

There’s no longer time for the Government of Australia to delay or find other solutions, and it’s for that reason that we’re asking people be evacuated today – Catherine Stubberfield, UNHCR

The UN agency’s appeal to the Australian authorities echoes a warning from non-governmental organization Médecins Sans Frontières (MSF) which pulled out of Nauru last week, at the request of the island’s authorities.

In the last 11 months on Nauru, according to MSF, at least 78 people attempted suicide, had suicidal thoughts or self-harmed.

Amid a “collapsing health situation”, UNHCR explained that around 500 people have been returned to Australia on medical grounds, but this is “significantly lower” than all those with acute needs.

There have been no returns from Papua New Guinea to Australia this year, the UN agency noted, despite “several instances” of self-harm or attempted suicide there in the past month.

In addition, a number of people with acute physical and mental needs remain untreated, UNHCR said.

The UNHCR spokesperson reported that of the 12 people who have died since Australia began detaining migrants and refugees offshore, half had been confirmed or suspected suicides. The mental health of those being held on the islands was worsening, she added.

“Our own consultant medical experts in 2016 found a cumulative prevalence of anxiety, depression and PTSD (post-traumatic stress disorder) in both Papua New Guinea and Nauru, to be well above 80 per cent, and the situation has deteriorated since then,” Ms. Stubberfield said. “So, there are very serious needs that are not being met. There’s no longer time for the Government of Australia to delay or find other solutions, and it’s for that reason that we’re asking people be evacuated today.”

Highlighting the case of a young Iranian man who took his life in June after spending “most of his adult life” in offshore processing, the UNHCR spokesperson underscored Australia’s obligations to those under its care.

“Ultimately, responsibility lies with Australia for those who have sought its protection,” Ms. Stubberfield said. “As we mentioned, this is a system designed, financed, managed by Australia, and it’s Australia which must be accountable for the full gamut of those consequences.”

Among UNHCR’s concerns is the lack of basic services available to vulnerable migrants and asylum-seekers.

Only “limited” healthcare is provided on both islands by sub-contractors on hire from the Australian Government, Ms. Stubberfield said, describing the service as “under-resourced and under-staffed”. 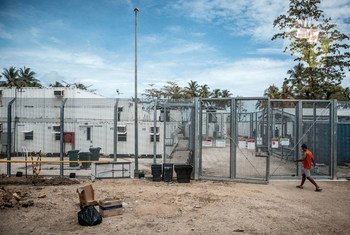 A senior United Nations refugee agency official warned on Wednesday about the “shocking” effects of long-term detention on Australia-bound asylum seekers who are being held on remote Pacific islands.