© UNICEF/Pirozzi
An 18-year-old girl at a centre for abused and trafficked children in Almaty city, Kazakhstan.
3 October 2018
Human Rights

Governments can and must do more to end the daily sexual abuse and exploitation of girls and boys worldwide, an event at UN headquarters in New York on Wednesday highlighted, including through a newly launched tool designed to help countries track progress and gaps.

“Every day, across all countries and levels of society, millions of girls and boys face the alarmingly common childhood experience of sexual abuse and exploitation,” said Amina J. Mohammed, the UN Deputy Secretary-General in her opening remarks for the event, co-organized by the World Childhood Foundation, the Swedish Mission to the UN, the UN Office of Partnerships and other non-profits.

According to the UN Children’s Fund (UNICEF), globally, as of 2014, at least 120 million girls under the age of 20 – about one in 10 – have been forced to engage in sex or perform other sexual acts. Millions more, including millions of boys, never tell anyone about being abused, for fear of stigma or reprisals.

Furthermore, the UK-based independent think-tank Overseas Development Institute (ODI), estimates that the global economic impacts and costs resulting from the consequences of physical, psychological and sexual violence against children could be as high as $7 trillion – a figure cited at the meeting by Ms. Mohammed. This massive cost is higher than the investment required to prevent much of that violence.

“Faced with growing evidence of the impacts and the emergence of the internet in facilitating the sexual exploitation of children, governments have started to act,” noted the deputy UN chief.

Target 16.2 of the Sustainable Development Goals (SDGs) calls on all countries to “end abuse, exploitation, trafficking and all forms of violence against, and torture of, children” by 2030.

“All over the world, governments are updating their laws and policies to more effectively criminalize child sexual abuse and exploitation. Governments are also building systems to better protect and care for child victims. Civil society, the media and industry are key allies in these efforts,” said Ms. Mohamed.

During the event, a benchmarking tool developed by The Economist Intelligence Unit was officially launched. Known as “Out of the Shadows”, it covers 40 countries and assesses how effectively nations are addressing issues of child sexual abuse across four categories: the safety of the environments in which children evolve; the legal frameworks in place; the level of government commitment and capacity to address the issue; and the level of engagement of the private sector, civil society and the media.

We see younger and younger kids. And the younger the kids are, the more violent the abuse, especially for boys - Björn Sellström, INTERPOL

The Index reveals that the wealthiest countries tend to have the highest rankings, but even so, their scores reveal critical gaps in terms of achieving all the necessary protective conditions for children.

Much of the sexual violence is being widely shared over the Internet. “In terms of trends, and this is of course worrying, what we see in terms of online sexual abuse, is that a vast majority of the children we’re looking at are ‘white’ children…coming from the Western part of the world,” said Björn Sellström, Coordinator for Crimes Against Children for the inter-governmental crime-fighting organization INTERPOL.

“We see younger and younger kids. And the younger the kids are, the more violent the abuse, especially for boys,” he explained, adding that the majority of the materials depict pre-pubescents or toddlers, which points to the fact that perpetrators are often well-known to the victims.

The UN deputy chief noted that thanks to data collected over the years, we now have a deeper understanding “of what works to make society safer for children”, insisting on the need for multi-sectoral and multi-partner approaches, within the UN and at the national level.

The Out of the Shadows tool was created to allow an easy collection and sharing of best practices worldwide, a reliable identification of gaps, and widen discussion of a subject that remains taboo in many societies.

Ms. Mohammed concluded: “Preventing violence and exploitation of children is everyone’s business, everywhere, at all times. We must address this challenge and break the silence.” 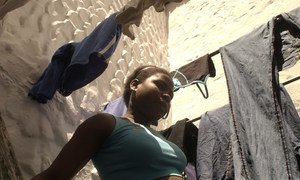 The effects of conflict-related sexual violence echo across generations, in the form of trauma, stigma, and unwanted pregnancy, said the UN chief on Tuesday, describing the scourge as “a threat to our collective security” and “a stain on our common humanity.”