© UNICEF/Arimacs Wilander
On 30 September 2018 in Indonesia, residents evacuate victims who died during the Palu earthquake at the Balaroa National Park, West Palu, Central Sulawesi, after the earthquake and tsunami that struck Sulawesi on September 28.

Four days after a deadly earthquake and tsunami hit the Indonesian island of Sulawesi, UN agencies and partners have warned that some communities have yet to be reached and the death toll may rise, as the scale of the destruction unfolds

“The Government of Indonesia have confirmed that 1,234 people have died following the earthquake and tsunami in Sulawesi,” Jens Laerke, from the UN humanitarian coordinating office, OCHA, told journalists in Geneva.

“Some 800 people have been seriously injured and nearly 100 people are still missing. It is likely that the casualty figures will increase as more areas become accessible and the Government conducts more assessments.”

At a collapsed church in Sigi Biromaru district, to the south of Palu city, rescuers described struggling through thick mud to retrieve the bodies of more than 30 youngsters from a bible study group.

“It took them one-and-a-half hours to carry each of the bodies out to nearby ambulances, having to wade through incredibly deep mud,” said Matthew Cochrane, spokesperson for the International Federation of Red Cross and Red Crescent Societies (IFRC).

“The sense from the teams all working there…is one of real frustration”, he said adding that “there are still large areas of what might be the worst-affected areas that haven’t been properly reached, but the teams are pushing, they are doing what they can.”

UN agencies and partners have already responded to Government calls for assistance, but access is still difficult to coastal and central areas of Sulawesi, where the full scale of the damage is unknown.

As part of the international response, the World Food Programme confirmed that it has been in close contact with the authorities since last Friday, when the disaster happened.

The situation is difficult, with shortages of fuel, damage to roads, sea infrastructure and airports impacting the work; telecoms are intermittent - WFP's Herve Verhoosel

“WFP logistics officers have arrived in Sulawesi, with a Government convoy and are advising the Government on logistic operations,” he explained. “The situation is difficult, with shortages of fuel, damage to roads, sea infrastructure and airports impacting the work. The telecoms are intermittent.”

The potential impact on youngsters is particularly concerning, UN Children’s Fund UNICEF said, with more than 40 per cent of under-fives in Central Sulawesi already stunted from malnutrition.

The fact that only 33 per cent of births are registered in the area is also a potential obstacle to reuniting unaccompanied minors with their families, UNICEF spokesperson Christophe Boulierac said.

“In Central Sulawesi we have concerns not only for the safety of children in Palu, but also in the city of Dongala and other communities still cut off from humanitarian aid,” he said, adding that the full impact of the earthquake and tsunami disaster was not yet clear.

Immediate priorities for the Government include evacuating people away from the worst-hit areas, according to the UN migration agency, IOM, but transport remains difficult and roads “perilous”, spokesperson Paul Dillon said.

Earlier on Tuesday, IOM’s Chief of Mission in Indonesia, Mark Getchell, had discussed the situation with the authorities, Mr Dillon added.

Aid could be delivered via a “humanitarian land bridge” from Jakarta to Sulawesi, Mr Dillon said, noting that the idea had been implemented following the 2004 Indian Ocean tsunami, from Jakarta to Aceh and from Medan to Aceh.

Delivering aid to Sulawesi through the port of Palu, continues to be a major challenge, however, the IOM spokesperson explained.

“The port itself has not been damaged (but) the cranes and gantries and the equipment you would use to remove goods from vessels have been badly damaged,” he said, adding that in some case they had been “completely knocked down, and access to the port itself is very difficult.”

Although the priority is on reaching survivors, damage to basic infrastructure and lack of clean water also pose a significant health threat.

Even before the disaster, Dongala and Palu had registered cases of acute diarrheal diseases and acute respiratory infections, said Tarik Jasarevic, spokesperson for the World Health Organization (WHO).

“What we may see as always in this kind of situation is additional injuries, in addition to those that have been already reported as a major health problem,” he said. “Obviously a lack of shelter and water and sanitation facilities could lead to diarrhoea outbreaks and other communicable diseases.”

The WHO official noted that an initial assessment by Indonesian officials had indicated that one hospital had suffered damage, while other health centres are being assessed.

In coordination with the Ministry of Health’s Crisis Center, the UN agency is also preparing to offer to deploy registered medical teams, Mr Jasarevic added.

© UNICEF/Arimacs Wilander
On 29 September 2018 in Indonesia, a number of cars are piled up after being dragged into the sea by the impact of the Tsunami on Talise Beach, Palu, after the earthquake and tsunami that struck Sulawesi on September 28.

She added that the Government “has significant experience and capacity to manage natural disasters, but given the scale and complexity of this emergency combined with the response to the recent series of earthquakes in Lombok and the residual needs there, UN agencies and NGOs are working closely with Government ministries to provide all necessary technical support.”

“With so many people having lost all their possessions and with many basic services down, there is also an urgent and immediate need for food, clean water, shelter, medical care and psychosocial support,” said Ms. Nirody. 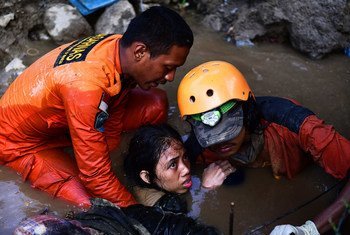 Rescue workers are still trying to reach areas of Sulawesi in Indonesia affected by an earthquake and tsunami, UN humanitarians said on Monday, noting that more than 840 people have died and more than 600 have been severely injured in the disaster. 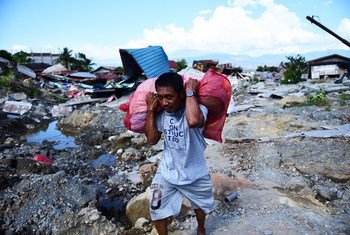