© UNHCR/Sufyan Ararah
As renewed fighting broke out in Tripoli, Libya, in early-September, UNHCR’s local office provided assistance to refugees and asylum-seekers who escaped from detention centres as rockets exploded around the capital. 8 September 2018.
25 September 2018
Humanitarian Aid

Ongoing clashes between different militias in the Libyan capital have trapped many civilians and displaced numerous families, according to the UN Office for the Coordination of Humanitarian Affairs (OCHA).

An estimated 5,000 families, including 1,700 in just the past two days, have sought refuge with relatives in safer parts of the city and its outskirts since fighting commenced on 26 August.

“Many are afraid to leave their homes because of looting by armed groups or criminal elements. As the fighting escalates, the number of civilians affected by violence is bound to increase,” UN Humanitarian Coordinator Maria Ribeiro said in a statement.

“In addition, the clashes have led to a breakdown in basic services such as electricity and water.”

It urged all parties to the conflict to take measures to protect civilians and civilian installations.

On 4 September, a ceasefire agreement was signed by the armed groups in Tripoli under the auspices of UN Special Representative, Ghassan Salamé, and the UN Support Mission in Libya (UNSMIL).

However, an increasing number of violations of the ceasefire has led to the death of dozens of civilians. 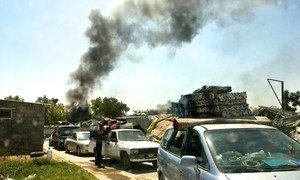 United Nations Secretary-General António Guterres stated on Friday that he is “alarmed by the increasing number of violations of the ceasefire” in the capital of Libya, Tripoli, which has led to the death of dozens of civilians.