The agreement between Turkey and Russia to create a demilitarized buffer zone protecting civilians living in Idlib, Syria, has been welcomed by United Nations Secretary-General António Guterres and the world body’s humanitarian chief, who called on all warring parties and countries supporting them to make it effective.

In a statement, Mr. Guterres also urged all parties in Syria to ensure safe and unimpeded humanitarian access to all areas of the country, where a brutal civil conflict has raged for more than seven years.

“The Secretary-General stresses the need for swift action to address the root causes of the conflict and forge, at long last, a durable political solution in line with Security Council resolution 2254”, noted the statement, released by his Spokesperson.

The agreement, reached between Turkish President Recep Tayyip Erdoğan and Russian President Vladimir Putin on Monday, aims to avert a full-scale military operation that the UN chief warned last week, could turn the region into a “bloodbath”. The last rebel-held Governorate in Syria, half of Idlib’s population of nearly three million, are internally-displaced civilians, and a million are children.

According to media reports, a 15-20-kilometre-wide de-escalation zone – to be patrolled by Russian and Turkish troops – will be established by 15 October, to separate Government forces from rebel fighters based there.

Military action will only exacerbate a complex situation – UN envoy

The agreement is also a welcome development amid “worrying escalation” in other parts of the country, Staffan De Mistura, the UN Special Envoy for Syria, told the Security Council on Tuesday, citing reports of fresh airstrikes in Damascus and the downing of a Russian military aircraft on Monday night, which left 15 servicemen dead.

Russia has blamed Israel for the incident. Israel on the other hand, said that its fighter aircraft were targeting a weapons shipment to Lebanon, threatening its security. The Israeli Defense Forces issued a statement on Twitter “expressing sorrow” for the deaths and blamed the Syrian military for the Russian aircraft being shot down. Israel also said that it will share all the relevant information concerning the incident with the Russian Government.

Now that we have this deal, there is no reason not to move forward expeditiously with the political process – UN envoy De Mistura

At the Security Council, UN envoy De Mistura, urged all parties to refrain from military action, reiterating that it would “only exacerbate a complex situation” in war-ravaged Syria.

Turning to the agreement itself, Mr. De Mistura said that there is now “no reason not to move forward expeditiously” on the political process, guided by Security Council resolution 2254, that lays out a roadmap for a political settlement in the country.

“We need an inclusive political process, and the UN is here to facilitate that process, starting with a constitutional committee getting to work,” he said, noting that the process must be credible, “because only then can the UN invest it with the legitimacy it needs.”

“I ask all concerned to give the UN facilitation in the next weeks, their full support,” he said.

However, delivering supplies remains difficult in other parts of the country, he said, noting in particular the situation in Rukban where lack of security is hampering aid operations.

He also spoke of “significant concerns” for the safety of civilians in Deir-ez-Zor, in eastern Syria, as well for displaced families returning home to Raqqa, the former stronghold of the ISIL terrorist group, despite the area remaining highly contaminated by explosive hazards.

“Efforts have been made to scale-up the mine action response… However, much more needs to be done before the city is safe and conducive for returns,” said Mr. Lowcock. 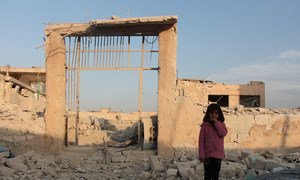