The outgoing UN General Assembly President, Miroslav Lajčák, called on the global community on Monday to remain steadfast in support of multilateralism, reiterating that it is the only way to address the complex and growing challenges facing the world.

“The stakes are high, we need to take the right road,” said Mr. Lajčák, in his final address to the 193-member General Assembly.

Mr. Lajčák spoke of “six major trends”, which he observed during his year as the General Assembly President, expressing hope that his observations will be useful as the new high-level debate gets underway.

On the first trend – peace – he noted the shift of the global discourse from a reactive approach to one of “sustaining peace.”

“But we have a lot of work ahead. Sustaining Peace cannot be, just, a concept – or an aspiration. Rather, it should be seen more like an Operations Manual. Something that guides the real work we do on the ground, every day,” he said.

Mr. Lajčák also highlighted the challenges posed by climate change and called for more leadership and funding to ensure sufficient resources are on hand to honour the Paris Agreement on climate change as well as the Sustainable Development Goals (SDGs).

The President of the 72nd regular session of the General Assembly also underlined the need for the world body to adapt to major global shifts, highlighting the work still to be done on the Global Compact for Migration, expected to be adopted in Morocco this December.

Dialogue leads to results. It is why, last February, we watched a joint Korean team playing in the Winter Olympics. It is why peace has returned to Colombia, after five decades of war – Assembly President Lajčák

With its universal membership and its flexible agenda, the General Assembly has “enormous legitimacy” and can play the role of a “global thought-leader,” he said, noting also the need for Organizational reforms and the steps initiated by Secretary-General António Guterres towards that end.

Next, Mr. Lajčák warned of shrinking space for global dialogue. “Dialogue is part of our humanity,” he said, noting recent world events that continue to illustrate the important results when leaders “talk through their differences.”

“Dialogue leads to results. It is why, last February, we watched a joint Korean team playing in the Winter Olympics. It is why peace has returned to Colombia, after five decades of war. And it is why, in January of last year, political turmoil in the Gambia did not turn violent.”

Alongside dialogue, Mr. Lajčák also highlighted the importance of multilateralism, noting that it too is under threat.

“It is clear that we live in a complex, uncertain world. That is why it is so tempting, to go it alone … and let everyone else fend for themselves,” he said.

“But history tells us that it is not the way forward. It tells us that – actually – this could be the way back ... There is still time to counter this trend. I hope that we don’t have to wait for disaster to teach us that multilateralism is the only way.”

UN Secretary-General Guterres also addressed the world body, congratulating President Lajčák for his leadership, as well as Member States on the completion of a very productive Assembly session.

“Last September’s general debate was the first in more than a decade at which all Member States spoke – a sign of welcome engagement by political leaders at the highest level, and of faith in the value of this unique and universal body,” he said.

In his remarks, he also noted the important issues addressed by the UN body during its session, demonstrating, yet again, its “invaluable role as a forum for addressing the full spectrum of the world’s concerns and aspirations.”

“He possesses deep knowledge across the international agenda,” said the UN chief of Mr. Lajčák, “and he has always been strongly committed to cooperation as a critical ingredient in success, and so took a wide range of steps to bring people together and new partners into the Assembly’s work,” he said.

The 73rd regular session of the General Assembly convenes on Tuesday, with María Fernanda Espinosa Garcés of Ecuador assuming the Presidency.

♦ Receive daily updates directly in your inbox - Subscribe here to a topic.
♦ Download the UN News app for your iOS or Android devices.
General Assembly|sustainable development 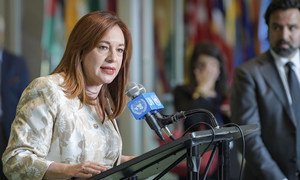 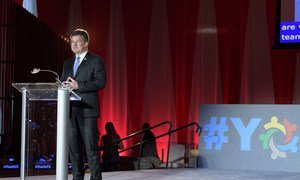 Last May, the United Nations General Assembly elected Miroslav Lajčák, the Foreign Minister of Slovakia, President of its 72nd annual session, and he formally took up the job on 12 September.