©FAO/Cristina Aldehuela
28 June 2018, Accra, Ghana. Women sell tomatoes at Agbogbloshie market. Agbogbloshie neighbourhood is internationally well known as its has one of the biggest electronic waste in the world.
17 September 2018
Climate and Environment

There will be “no sustainable future without eradicating poverty and hunger,” the United Nations agriculture agency chief spelled out on Monday, launching the Food and Agriculture Organization’s (FAO) latest flagship publication, on the world’s Agricultural Commodity Markets.

Focusing this year on the links between agricultural trade, climate change and food security, Director-General José Graziano da Silva said in the foreword that “ensuring food security for all is both a key function of, and a challenge for agriculture, which faces ever-increasing difficulties.”

“As populations rise, urbanization increases and incomes grow, the agricultural sector will be under mounting pressure to meet the demand for safe and nutritious food,” Mr. da Silva explained.

Climate change will have an increasingly adverse impact on many regions of the world, with those in low latitudes being hit the hardest – FAO chief

He sized up that agriculture must generate decent jobs to support billions of rural people globally, especially in developing countries where hunger and poverty are concentrated.

Turning to the warming planet, he underscored that agriculture is pivotal in helping to sustain the world’s natural resources and biodiversity.

“Climate change will have an increasingly adverse impact on many regions of the world, with those in low latitudes being hit the hardest,” he said.

The report points out that by the middle of this century, higher temperatures, precipitation changes, rising sea levels, extreme weather events and a likely increase in damage due to pests and disease, will all significantly impact agriculture and food security.

Climate change impacts will be affect different places in different ways, with variations across crops and regions. Arid and semi-arid regions will be exposed to even lower rainfall levels and higher temperatures, lowering crop yields.

Countries in Africa, Asia and Latin America will be disproportionately affected, many of which already suffer from poverty, food insecurity and malnutrition.

“Unless we take urgent action to combat climate change, we can expect to see a very different global picture of agriculture in the future,” the FAO chief stressed.

The relationship between agricultural trade and food security is increasingly important in both trade and development agendas, with developing countries requiring international support to cope with climate change.

While international trade can potentially stabilize markets and reallocate food from surplus to deficit regions, Mr. Graziano da Silva emphasized: “We must ensure that the evolution and expansion of agricultural trade is equitable and works for the elimination of hunger, food insecurity and malnutrition globally.”

Against the backdrop that the world’s food system overall in 2050 will need to produce almost 50 per cent more, compared to 2012, according to the report, the sector needs to adjust to climate change effects and reduce greenhouse gas emissions, while meeting a growing demand.

Producing more with less, while preserving natural resources and enhancing the livelihoods of small-scale family farmers, will be a key challenge for the future.

“Developing and implementing policies that shift global agricultural production onto a more sustainable path, protect the most vulnerable countries and regions…will be key if we are to see a world free of hunger and malnutrition by 2030,” concluded the Director-General.

♦ Receive daily updates directly in your inbox - Subscribe here to a topic.
♦ Download the UN News app for your iOS or Android devices.
sdg|environment 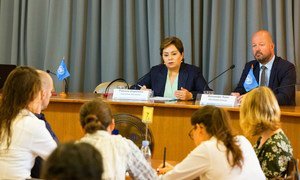 New UN-backed commitments to take action against the damaging effects of climate change, could result in $26 trillion in economic benefits worldwide, and help create 65 million new “low-carbon jobs” by 2030 – the deadline for the realization of the Sustainable Development Goals (SDGs).