Economic sanctions must not be allowed to degenerate into blockades which “expose people to the ravages of economic war in peacetime” said the UN independent expert on the effects of sanctions on human rights.

Special Rapporteur Idriss Jazairy, pointed out on Thursday, that civilians affected by blockades do not benefit from the protection of the Geneva Convention, which is aimed at safeguarding civilians during war time.

Briefing the Human Rights Council in Geneva, Mr. Jazairy said that people in Iran and Venezuela risk being badly affected, were any blockade to be imposed, while the situation for those in Syria – already suffering grave human rights abuses – would have even worse consequences.

In Yemen, one of the poorest countries on earth, which imports almost all of its food, fuel and medicines, civilians were weakened further by a total blockade imposed in November 2017, preventing all humanitarian aid and commercial trade - including food and fuel - from entering the country.

In Gaza, where residents have lived through an Israeli blockade for more than a decade, after the militant group Hamas gained control of the enclave, civilians have suffered from a deteriorating humanitarian situation.

In August, UN Political Affairs chief Rosemary di Carlo told the Security Council that humanitarian aid in the Middle East should not be held hostage to politics.

“There is a need for differences between States to be resolved through peaceful means as advocated by the UN Charter, while avoiding exposing innocent civilians to collective punishment,” said Mr. Jazairy, expressing concern about the growing practice of unilateral sanctions, where a particular country bans companies and corporations from doing business with a sanctioned state.

Referring to a recent meeting in Brussels with European Officials, Mr. Jazairy told the Council that he has urged the EU to limit “secondary sanctions”, which go beyond targeted countries.

He said he would focus on making humanitarian exceptions to internationally imposed measures effective, until States lift all sanctions that lead to human rights infringements.

♦ Receive daily updates directly in your inbox - Subscribe here to a topic.
♦ Download the UN News app for your iOS or Android devices.
sanctions|blockade|Gaza 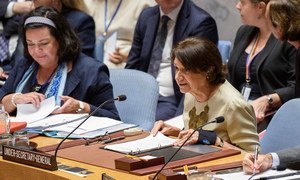