New laws in Hungary, and Government attacks on civil society in the country, fuel “hostility, xenophobia, and discrimination against migrants, asylum seekers, refugees and all those trying to provide them support”, say a team of independent human rights experts mandated by the UN Human Rights Council.

The experts expressed concern in a statement released on Tuesday, following the adoption of legislation which the Hungarian Government has named the “Stop Soros” law, imposing further restrictions on the right to seek asylum, and making it practically impossible for asylum seekers to submit asylum claims and regularise their migratory status.

The Government’s name for the law is a reference to Hungarian-born billionaire George Soros, whose Open Society Foundations (OSF) are committed to “build vibrant and tolerant societies whose governments are accountable and open to the participation of all people”, according to the OSF Website.

OSF has reportedly moved its Budapest branch to the German capital, Berlin, writing in a May statement that it was leaving Hungary because of the "increasingly repressive political and legal environment."

Under the measures, individuals or organisations can also be sent to prison for “supporting and facilitating illegal immigration.”

Additional laws levy a special 25 per cent tax on NGOs who engage in “immigration activities”, restrict assembly, and impose restrictions on the work of civil society.

The experts noted that the Government is encouraging regular and widespread threats to human rights defenders in Hungary, saying: “Since the last general election, the Government has engaged in smear campaigns against civil society, particularly in connection to migration issues, discrediting and intimidating dissenting voices, notably through its own agencies and through the public media.”

These attacks, combined with the current legislation, they continued, run counter to Hungary’s obligations under international human rights law and represent a serious breach by Hungary of the obligations and values that found the European Union, of which it is a member.

“We call on the European institutions to continue addressing the deteriorating human rights situation in Hungary and keep on taking decisions reflecting the core values of the European Union: democracy, the rule of law and the protection of human rights.”

A number of international and inter-governmental institutions have condemned the legislation, including the UN High Commissioner for Human Rights, the UN Human Rights Committee, the Council of Europe, the Organization for Security and Cooperation in Europe, and the European Commission.

The European Parliament is reportedly discussing whether to launch disciplinary proceedings against Hungary, due to its policies on issues such as migration. 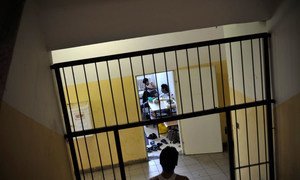 Hungarian legislation that criminalizes anyone who supports asylum seekers and other vulnerable individuals is “blatantly xenophobic”, “shameful” and “disgraceful”, the UN human rights chief said on Thursday. 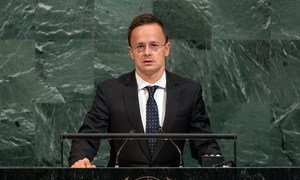 The migration crisis and associated threat of terrorism are the greatest threats ever faced by the European Union, Péter Szijjártó, Minister for Foreign Affairs and Foreign Trade of Hungary, told the United Nations today, denouncing those that encourage ‘waves’ of migrants, which were only putting thousands of people in danger.