The United Nations Assistance Mission in Afghanistan (UNAMA) condemned an attack on a Kabul sports centre on Wednesday, which killed at least 22 people, including first-responders, sportsmen, and two journalists who were covering the initial bombing for a local news agency. Around 75 others were wounded.

The first of two blasts occurred when a suicide bomber detonated himself inside a gym at a wrestling event. A car bomb was triggered soon after, as first responders attended the scene.

“This latest cynical act of terror targeting ordinary citizens of Kabul, along with first responders and journalists, is deeply shocking,” said Tadamichi Yamamoto, the UN Special Representative for Afghanistan.

In a later statement, the UN Secretary-General António Guterres,  also condemned the attack and said via his Spokesman that "every effort should be made to bring to justice those who organized this attack against civilians."

The sports centre is located in Kabul’s Dashti-i-Barchi suburb, which is predominantly a Shi’a Muslim neighbourhood.

UNAMA has documented a pattern of attacks deliberately carried out against this minority community in recent years, the latest of which occurred on 15 August at an education centre.

As the Shi’a community prepares in coming days to commemorate Ashura –  at which time millions of Shia Muslims globally mark the martyrdom of the prophet Mohammed’s grandson at the Battle of Karbala, “immediate and long-term security measures must be commensurate with the continued risks this community is facing”, said a statement released on Thursday by the Mission.

UNAMA demanded that “the orchestrators of this campaign of systematic attacks against the Shi’a Muslim religious minority face justice for their crimes.”

The UN mission also expressed its deep concern over the heavy price paid by Afghan media during the years-long civil conflict, with the killing of journalists in Afghanistan being among the highest in the world, and extended its deep condolences to families who had lost loved ones and wished the injured a quick recovery.

“We join Afghans in expressing our revulsion at such a callous attack,” concluded Mr. Yamamoto.

According to news reports, while the Taliban denied responsibility, the attack bore the hallmarks of the terrorist group ISIL, also known as Da’esh, which has carried out a wave of bombings against minority Shiites in recent years.

In July, UNAMA released figures highlighting the tragic toll the conflict has had on civilians, revealing that the first half of 2018 was the deadliest for Afghans since UNAMA began documenting civilian casualties in 2009.

♦ Receive daily updates directly in your inbox - Subscribe here to a topic.
♦ Download the UN News app for your iOS or Android devices.
Afghanistan|attack|journalist 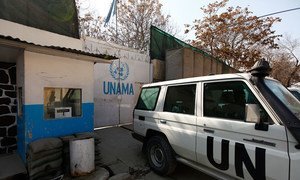 The perpetrators of Wednesday’s “heinous” suicide bombing that killed students at an education centre in Afghanistan’s capital, Kabul, must be brought to justice, the UN Secretary-General has said.