Secretary-General António Guterres has condemned the attack on 23 August by presumed anti-Balaka elements on the United Nations Multidimensional Integrated Stabilization Mission in the Central African Republic (MINUSCA) in which one peacekeeper from Burundi was killed.

In a statement issued by his Spokesman, Mr. Guterres offered his deepest condolences to the family of the deceased peacekeeper, as well as to the Government of Burundi.

The UN chief also recalled that intentionally directing attacks against United Nations peacekeepers may constitute a war crime and that sanctions can be applied against the perpetrators.

“He urges the Central African Republic (CAR) authorities to investigate them and swiftly bring those responsible to justice,” said the statement.

Fighting between the mostly Christian anti-Balaka militia and the mainly Muslim Séléka rebel coalition has plunged the CAR into civil conflict since 2012. A peace agreement was reached in January 2013, but rebels seized the capital, Bangui, in March of that year, forcing President François Bozizé to flee.

Concerned with the security, humanitarian, human rights and political crisis in the CAR and its regional implications, the UN Security Council authorized the deployment of MINUSCA in 2014 with the protection of civilians as its utmost priority.

The Mission said that on Thursday, suspected armed anti-Balaka fighters attacked MINUSCA personnel who were securing a logistics truck near the village of Pavika, located 22 km from Alindao, in CAR’s Basse-Kotto Prefecture, which is in the southern-central part of the country.

Peacekeepers from the advanced MINUSCA Force military post at Pavika were en route to reinforce the convoy that evening when they were ambushed by another suspected armed anti-Balaka group. The blue helmet was killed in the ensuing shootout between peacekeepers and the attackers, who later fled the area.

In a statement, MINUSCA strongly denounced the “reprehensible attack” on peacekeepers “whose presence in the CAR has the singular objective of protecting the civilian population and supporting the Central African Republic in escaping the cycle of violence caused by armed groups.”

The Mission also extended its condolences to the family of the victim and to the Government and people of Burundi.

♦ Receive daily updates directly in your inbox - Subscribe here to a topic.
♦ Download the UN News app for your iOS or Android devices.
Central African Republic|MINUSCA 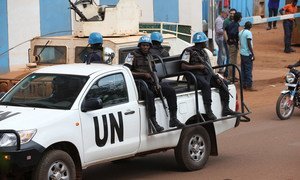 While many positive steps have been taken in the Central African Republic (CAR), progress has been too slow and is continually under threat from “those who seek private gains through violence,” the United Nations envoy on the ground told the Security Council on Thursday, underscoring that restoring government authority is “key”, both now and in the long-term.