The United Nations General Assembly in New York on Friday approved the nomination of former two-time President of Chile, Michelle Bachelet, as the next UN High Commissioner for Human Rights, effective from 1 September.

Minutes after she was approved, UN chief Antonio Guterres told reporters he was “delighted” by the news of her official appointment as Ms. Bachelet, a "pioneer", has been "as formidable a figure in her native Chile, as she has at the United Nations”.

Highlighting her role as the first leader of UN Women, between 2010 and 2013, he said she gave “that new entity a dynamic and inspiring start”. He also pointed to her remarkable career as “the first woman to serve as the country’s President, but also as a survivor of brutality by the authorities targeting her and her family, many decades ago”.

“She has lived under the darkness of dictatorship,” he continued. “As a physician, she knows the trials of people thirsting for health and yearning to enjoy other vital economic and social rights. And she knows the responsibilities of both national and global leadership”.

Following the announcement, Ms. Bachelet said she was "deeply humbled and honored" to have been entrusted with "this important task."

As this year marks the 70th anniversary of the Universal Declaration of Human rights, and at a time when “hatred and inequality are on the rise,” the Secretary-General said it was vital to have a “strong advocate for all human rights” and he “could not think of a better choice”.

“Michelle Bachelet brings unique experience to the United Nations and to all of us, and is strongly committed to keeping human rights at the forefront of the work of the United Nations,” he concluded. “She has my full confidence and support, and I ask all Member States and our partners to extend to her their support”.

Her predecessor in this position, Zeid Ra’ad Al Hussein, who took on the role in September 2014 and who Mr. Guterres described as having served with “leadership, passion, courage and skill” for the past four years, also warmly welcomed her appointment.

“She has all the attributes – courage, perseverance, passion, and a deep commitment to human rights – to make her a successful High Commissioner,” he said on Friday in a statement, adding that the UN Human Rights Office (OHCHR) “looks forward to welcoming her and working under her leadership for the promotion and protection of all human rights, for everyone, everywhere”.

The UN chief paid special tribute to Zeid, who is stepping down after one term as the key UN voice on global human rights at the end of this month, saying that he wished “to express my deep gratitude to my good colleague and friend.”

Coming up next week, watch out for our in-depth interview with Zeid Ra'ad Al Hussein, who reflects on the "central duty" of the High Commissioner to defend rights on behalf of the world's most marginalized. Catch it on video, podcast and text.

♦ Receive daily updates directly in your inbox - Subscribe here to a topic.
♦ Download the UN News app for your iOS or Android devices.
human rights|General Assembly 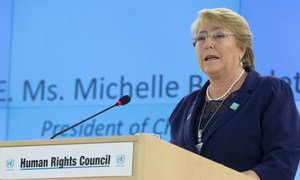 She has twice been President of Chile, and on Wednesday, ground-breaking politician and women’s rights champion, Michelle Bachelet was nominated by the United Nations chief António Guterres for the key post of High Commissioner for Human Rights.