UN News/Elizabeth Scaffidi
A Karen woman weaves as her daughters play near her in Chiang Rai, Thailand.
10 August 2018
Human Rights

“They form about 5,000 distinct indigenous groups, and speak over 4,000 languages,” Liu Zhenmin, the head of Economic and Social Affairs at the UN (DESA), told the high-level segment of a meeting to mark the day at UN Headquarters in New York, highlighting their strong spiritual connection with their lands and resources.

“However,” he pointed out, “indigenous peoples are increasingly losing their ancestral lands as a result of development projects, settlement programmes, conflict and violence, and climate change,” he added.

While constituting less than five per cent of the world's population, they account for 15 per cent of the poorest. “As a result, urban areas are now home to a significant proportion of indigenous populations,” he stated.The 2018 commemoration shined a light on Indigenous peoples’ migration and movement.

While migration offers some opportunities, such as the hope of peace, security and better social services, Mr. Liu outlined the challenges, including “poverty, little or no access to education, employment or other social services, as well as human trafficking, gang-related and other violence.”

And yet, indigenous peoples have created ways to revitalize their cultures and strengthen their identities.

“Indigenous peoples are not on the margins of these movements,” she said, pointing out that some migrate for economic reasons, others for natural disasters, conflicts or to protect human rights.

“For some Aboriginal Peoples such as Inuit, Sami, Fulani, Tuareg, displacement is also part of the traditional way of life,” she added.

It's International Day of the World's Indigenous Peoples on Thursday. @UN4Indigenous #StandUp4 HumanRights #WeAreIndigenous. Here's why it's so important. pic.twitter.com/Br0omCXO1A

Ms. Aboubakrine explained that these displacements have been handed down for thousands of years from generation to generation, as a way of preserving natural resources, the environment and biodiversity, saying that it is “crucial” for indigenous survival.

She concluded by urging Member States and the international community to revise migration policies to align with international human rights treaties, including the UN Declaration on the Rights of Indigenous Peoples. 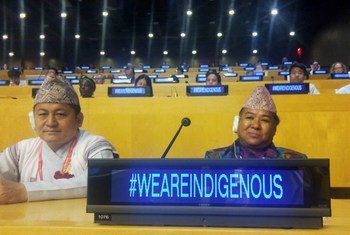 Opening the panel discussion, Rosa Montezuma expressed pride in being a young indigenous woman, the first to hold the title of “Miss Panama 2018,” expressing her hope of using the opportinity to demonstrate that indigenous women are capable, talented and professional. “Indigenous peoples have the right to live with respect, free of all kinds of discrimination,” she said.

Speaking on behalf of the Tohono O’odham Nation in the US state of Arizona, Amy Juan painted a picture of enforced militarization and occupation that curtails their freedom of movement.

Ms. O’odham pointed to the establishment of the US Department of Homeland Security in 2002 after the 2001 terrorist attacks, saying: “We have come to look around us and live with checkpoints to every entrance and exit to the Tohono O’oodham nations, that consists of armed Border Patrol agents, canines, and infra-red, radiation and surveillance technology.”

Indigenous people in a remote mountain town in the Andes in Peru are being helped to boost their incomes by preserving a valuable but threatened breed of alpaca.