UNICEF/Souleiman
In Al-Tabqa city, Syria, a 12-year-old boy and his friends walk past a destroyed car. He and his family were uprooted twice during the years-long conflict, forcing him to drop out of elementary school. (file)

More than 7,000 children have lost their lives or been maimed as a result of the brutal conflict in Syria, a senior United Nations official told the UN Security Council on Friday, stressing that they had been abused by the warring parties for far too long.

“It is time for the children of Syria to believe in their own future and to learn what peace means,” Virginia Gamba, the UN Secretary-General’s Special Representative for Children and Armed Conflict, told the Security Council.

“It is time for them to retake the childhood that was taken away from them. It is time for them to stop being victims and become game changers, in the restoration of normality in peace and justice. They have been used and abused by, in and for armed conflict, for far too long,” she added.

Ms. Gamba said that since the beginning of the Syria crisis in March 2011, the UN has verified the killing or maiming of more than 7,000 children in the conflict, now in its eighth year.

It is time for them to stop being victims and become game changers, in the restoration of normality in peace and justice - Virginia Gamba

“I must stress that this is the verified number alone, the unverified reports reflect numbers that go way beyond 20,000 child casualties”, she added.

She said they had suffered multiple appalling violations; in their homes, communities, schools, detention centres and displacement camps.

In 2005, the Security Council adopted a resolution that established a monitoring and reporting mechanism (MRM) for six grave violations against children in armed conflict situations.

The six violations are: killing and maiming; recruitment or use as soldiers; sexual violence; abduction; attacks against schools or hospitals; and denial of humanitarian access.

Based on the resolution, the mechanism for the situation in Syria was established in 2013.

UN Photo/Rick Bajornas
Virginia Gamba, Special Representative of the Secretary-General for Children and Armed Conflict, addresses the Security Council meeting on the situation in the Middle East.

“Every year since then, there has been a tremendous increase in all grave violations committed by all parties to the conflict”, she said.

Since the beginning of this year, the mechanism has verified more than 1,200 violations against children. More than 600 children have been killed or maimed; more than 180 were recruited and used; more than 60 schools have been attacked, while over 100 attacks on hospitals and medical facilities or personnel have been verified.

Ms. Gamba said most of these violations have occurred in the context of military surges by various parties in the areas of Afrin, Hama, Idlib, east Ghouta and Dara’a in the last six months.

“I am deeply disturbed by the stories of children born and raised throughout this conflict, children who have never seen peace in Syria”, she said. “They do not know the meaning of the word ‘peace’”.

Also briefing the Security Council was the UN Emergency Relief Coordinator, Mark Lowcock, who gave detailed updates on the humanitarian situation across the war-ravaged country.

“The appalling suffering this war has wrought on Syria’s children is truly unimaginable”, he said. “Yet, it is Syria’s children who are the future of the country. Ensuring that their rights are respected, protected and fulfilled must be at the centre of all of our efforts.”

UN Photo/Rick Bajornas
Mark Lowcock, Under-Secretary-General for Humanitarian Affairs and Emergency Relief Coordinator, at the Security Council meeting on the situation in the Middle East.

Mr. Lowcock, UN Under-Secretary-General for Humanitarian Affairs, said that since November 2017, the total number of people in need of humanitarian assistance in Aleppo and Idleb governates has increased by nearly 600,000, to a total of around 4.2 million.

He said that humanitarian needs remain high in eastern Ghouta, though there are also reports of markets beginning to function again and the return of other activities resembling normal daily life.

About 10,000 people from east Ghouta, mostly men between the ages of 15 and 65, are reported to remain in displacement sites across Rural Damascus. In the north east, returns to the liberated city of Raqqa – the former ISIL terrorist stronghold - have continued, despite risks due to high levels of explosive hazard contamination.

There are also very serious concerns about civilians trapped in areas held by ISIL, otherwise known as Da’esh, in the eastern part of Deir-ez-Zor governorate. 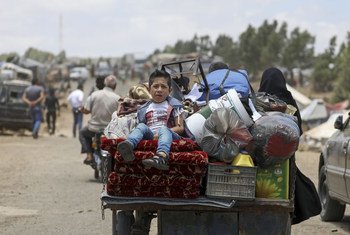 More than 180,000 people are in urgent need of humanitarian assistance in south-west Syria after weeks of escalating hostilities that have restricted aid access to the area, the UN said on Friday.