Suhair Karam/IRIN
A view of Jabalia refugee camp. Jabalia is the largest of the Gaza Strip's eight refugee camps. It is located north of Gaza City, close to a village of the same name.

From arbitrary detentions and deliberate deprivation, to attacks against civilians and forced displacements, the UN High Commissioner for Human Rights, Zeid Ra'ad Al Hussein, expressed “acute concerns” on Monday over the current human rights situation in the Occupied Palestinian Territory.

Briefing the Committee on the Exercise of the Inalienable Rights of the Palestinian People, Zeid – who also heads the UN human rights office, OHCHR – expressed concern over the dramatic escalation of violence along the border between the Gaza Strip and Israel during the past few months, in which dozens of Palestinian civilians were killed.

“I remind all parties that any disproportionate or indiscriminate use of weapons which lead to the death and injury of civilians is prohibited by international humanitarian law”, said High Commissioner Zeid, warning that this escalation could potentially threaten peace across a far broader region.

Though the United Nations and the Government of Egypt have made efforts to maintain a ceasefire between Israel and the militant group Hamas which controls Gaza, the situation remains extremely fragile, he said. “I urge the parties and all those with influence to do their utmost to avoid another round of violence and misery.”

In his briefing, the Human Rights chief highlighted the dire conditions that Palestinians living in Gaza continue to endure. He regretted that these regular waves of violence “compound the already extreme humanitarian crisis”, which he denounced as “entirely man-made and entirely preventable”, including “skyrocketing unemployment and poverty, crumbling infrastructure, record food-dependency and a bleak political horizon”.

The grave funding crisis currently faced by the UN Relief and Works Agency for Palestine Refugees (UNRWA) – which plays a crucial role in providing protection, education and health services as well as employment to the refugee populations – is likely to further aggravate the situation, he said.

Regarding the recent “shocking killings” along the Gaza fence during the ‘Great March of Return’ demonstrations, he noted that the Human Rights Council resolved in May, to dispatch an independent, international Commission of Inquiry on the matter.

“It is essential that the authorities cooperate with the future Commission to advance accountability for these killings, as well as all alleged violations and abuses of international humanitarian law and international human rights law”, Zeid said, adding that “although Israel has put in place a number of accountability mechanisms, there are serious concerns that these are not in compliance with the international standards of independence, impartiality, and effectiveness.”

He said that it would also be “vital to address the root causes of the recent demonstrations”, namely the “grossly inadequate living conditions” in Gaza.

In his statement, Zeid mentioned the  adoption in July by Israel of the Nation-State Basic Law, stating that it "anchors inherent discrimination against non-Jewish communities, most notably the Arab citizens of Israel and residents of occupied East Jerusalem" and that it "could also further inflame tensions".

The UN Human Rights High Commissioner went on to highlight that the planning and construction of Israeli settlements continues “unabated” across the occupied West Bank, including East Jerusalem. “Since the beginning of 2018, settler attacks on Palestinians have spiked to the highest monthly average of the past three years,” he added.

As for demolitions and forced displacement of Palestinian families in the occupied West Bank and East Jerusalem, despite having slowed down after peaking in 2017, they continue to take place monthly, said Zeid, with 366 structures demolished in the West Bank alone – including 11 school structures – in the past year.

Other violations in breach of international law cited by the High Commissioner include increasing restrictions on movement; daily intimidation by soldiers at checkpoints; settler violence and harassment; forced transfer, and the continued existence of the separation wall.

The Human Rights chief highlighted also the plight of hundreds of Palestinian children detained by Israel, including some without charge, under the so-called "administrative detention" system. An estimated 440 Palestinians are being held currently.

“These assaults on fundamental rights dismantle trust in institutions; strip away the social structures which enable peaceful resolution of disputes; and create a tinderbox in which any flash of conflict may ignite severe and unpredictable consequences,” he concluded.

On Monday, the UN Special Committee to Investigate Israeli Practices Affecting the Human Rights of the Palestinian People and Other Arabs of the Occupied Territories also denounced the deterioriating human rights situation for Palestinians, following their annual mission to Jordan. 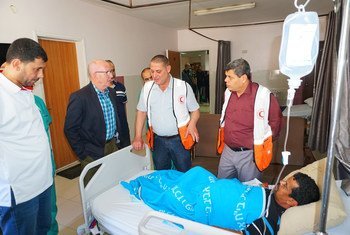 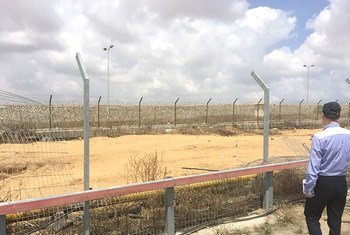 Voicing deep concern over the latest flare-up of violence around Gaza, the United Nations chief on Saturday urged all sides to “step back from the brink of another devastating conflict”.