UN Photo/Loey Felipe
Secretary-General António Guterres (centre) addresses the closing session of the High-level Political Forum on Sustainable Development. At left is Liu Zhenmin, Under-Secretary-General for Economic and Social Affairs, and at right is Marie Chatardová, President of the Economic and Social Council (ECOSOC) and Permanent Representative of the Czech Republic to the UN.
18 July 2018
SDGs

“We need to embed the essence of the 2030 Agenda into everything that we do,” said Secretary-General António Guterres.

The UN chief stated that the Forum has been a time to recommit to the 2030 Agenda, assess where we are and what needs to be done ahead. At the HLPF, More than a thousand government, business and civil society leaders have been taking stock of progress made towards meeting the 2030 Global Goals, and what help countries need to accelerate progress.

Marking the end of the high-level ministerial segment on Wednesday evening at UN Headquarters in New York, a detailed draft Ministerial Declaration was adopted, with 164 countries in favour, two against, and no abstentions. The declaration reaffirmed the support of countries which are working towards making the SDGs a reality. Last-minute debate on the declaration forced revisions and representatives from several national blocs and Member States, voiced concerns over changes to the draft text, and specific paragraphs which proved controversial.

In his address, Mr. Guterres pointed to the pressing challenges of expanding conflicts and inequality; the erosion of human rights; an “unprecedented” global humanitarian crisis; and “persistent pockets” of poverty and hunger - while laying out pathways to move forward.

“Mobilize the transformative power of the world’s young people,” Mr. Guterres said, noting that a UN strategy to address that need, will be launched in September.

He underscored that greenhouse gas emissions must be brought under control, saying that there was a lack of political will to meet commitments and that he would convene a Climate Summit in September “to galvanize greater climate ambition.”

Moving to the crucial issue of funding the Sustainable Development Goals (SDGs), the Secretary-General said a High-level Meeting on Financing the 2030 Agenda would also be taking place later in the year.

He described technology as a double-sided coin which helps deliver the SDGs but also exacerbates inequality. Last week he announced the formation on a new High-Level Panel on Digital Cooperation, which will be reporting to him in the coming months.

Mr. Guterres stressed that development is not only a conflict-prevention tool, but fosters conditions for resilient societies and a peaceful world. “Multilateralism is the only way to tackle the complex, inter-connected and long-term challenges we are facing,” he told delegates to the forum.

The UN chief drew attention to the Global Compacts for Migration and on Refugees as central in addressing SDGs, and expressed gratitude that States have embraced UN Development System reform to help Governments respond to the 2030 Agenda.

“Let us demonstrate through decisive actions that the transformation demanded by the 2030 Agenda for Sustainable Development is well and truly underway,” concluded the Secretary-General.

UN Photo/Loey Felipe
Marie Chatardová, President of the Economic and Social Council, addresses the opening of the Ministerial segment of 2018 High-Level Political Forum on Sustainable Development.

Taking stock of the Forum in her closing remarks, Marie Chatardová, President of the Economic and Social Council (ECOSOC), commended the “record” 46 countries that had presented their Voluntary National Reviews (VNRs) which spell out how they are implementing the SDGs, ahead of the ambitious finishing line of 2030.

She heralded the first-ever VNR Lab where countries talked about “what they have accomplished, what is holding them back and how the VNRs can help…It is clear,” she said, “that we are only at the beginning of the journey.”

Ms. Chatardová also reflected on the HLPF’s many “vibrant” special events, including the first Local and Regional Governments’ Forum, the SDG Business Forum, and the Partnership Exchange; as well as the “record number of side events.”

“We cannot afford to lose this momentum,” she stressed, urging everyone to put the recommendations into action, make stronger commitments, and scale up best practices.

She also encouraged decisive action before September, when the HLPF meets during the new General Assembly session to review the entire 2030 Agenda.

“We need your tireless efforts and commitments if we are to reach our collective goals for a better world,” concluded Ms. Chatardová.

♦ Receive daily updates directly in your inbox - Subscribe here to a topic.
♦ Download the UN News app for your iOS or Android devices.
2030 Agenda for Sustainable Development 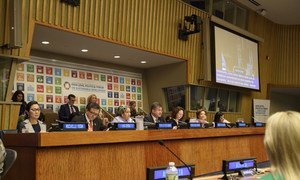