UNICEF/Ayberk Yurtsever
A child being administrated a dose of polio vaccination. Immunization programmes are a key element to strong health-care systems.
16 July 2018
Health

A record-breaking total of around 123 million, or nine out of 10, infants, received at least one dose of diphtheria-tetanus-pertussis vaccine in 2017, protecting them from deadly infectious diseases, according to United Nations figures released on Monday.

An additional 4.6 million infants were vaccinated globally in 2017, compared to 2010, due to the pace of global population growth.

And the data from the World Health Organization (WHO) and the UN Children’s Fund (UNICEF) shows that 167 countries included a second dose of measles vaccine, as part of their routine vaccination schedule, and 162 countries now use rubella vaccines. As a result, global coverage against measles and rubella increased from 35 per cent in 2010, to 52 per cent.

The human papillomavirus (HPV) vaccine was introduced in 79 countries to help protect women against cervical cancer.

Newly available inoculations are also being added as part of the overall package of life-saving vaccinations, such as those to protect against meningitis, malaria, and even Ebola.

Despite these successes, almost 20 million infants did not receive the benefits of full immunization in 2017. Of these, almost 8 million, or 40 per cent, live in fragile or crisis-affected places, including countries affected by conflict.

In addition, a growing percentage are from middle-income countries, where increasing inequality and marginalization - particularly among the urban poor - prevent many from getting immunized.

As populations grow, more countries need to increase their investments in immunization programmes, says WHO and UNICEF.

♦ Receive daily updates directly in your inbox - Subscribe here to a topic.
♦ Download the UN News app for your iOS or Android devices.
immunization 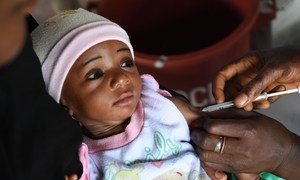 At the start of World Immunization Week , the United Nations on Tuesday said that while vaccines are protecting more children than ever, more countries need to make immunization a priority, because more than one million children still die every year from vaccine-preventable diseases.