UN Photo/F. Charton
A Cakchiquel family in the hamlet of Patzutzun, Guatemala.
18 May 2018
Human Rights

It’s becoming increasingly dangerous to defend the rights of indigenous people in Guatemala, the United Nations human rights office warned on Friday, following the murder of three activists over the past 10 days.

“We are concerned about what appears to be a deteriorating climate for the defence of human rights in Guatemala,” Ravina Shamdasani, Spokesperson for the Office of the UN High Commissioner for Human Rights (OHCHR), told reporters in Geneva, urging the State to ensure a safe working environment free from threats and attacks.

On 9 May, a rights officer working on behalf peasants and indigenous peoples, was killed in the town of San Luis Jilotepeque Jalapa.

A community leader from the grassroots social justice group known as Comité Campesino de Desarrollo del Altiplano (CCDA), was murdered on 10 May, and another member of the organization was found dead on 13 May.

The two most recent killings took place in an area of Guatemala where CCDA, and other civil society organizations, have been working with the Government, on an agreement to address more than 50 land conflicts in the country.

“We call on the authorities to promptly investigate these murders and other attacks and threats against human rights defenders, and to ensure that those found responsible are held accountable,” Ms. Shamdasani said.

“We share the deep concerns about the protection of indigenous peoples who claim rights to land, as expressed by UN Special Rapporteur on the Rights of Indigenous Peoples, Victoria Tauli-Corpuz, during her visit to Guatemala earlier this month,” she added. 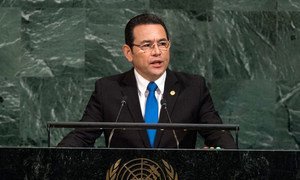 Guatemalan President Jimmy Morales, addressing the United Nations General Assembly today, pledged the firmest intention to strengthen and support the International Commission against Impunity of Guatemala (CICIG), while stressing that no institution should interfere in the country’s administration of justice.