UNICEF/UN022064/Ayene
Mundene, a mother in Ethiopia has committed to breastfeeding until her baby is 6 months old
10 May 2018
Health

Some 7.6 million babies across the world are not breastfed each year despite clear evidence that it can save lives, and protect babies and mothers against deadly diseases.

Mothers in wealthier countries often lack support for breastfeeding at home or in the workplace.

“Breastfeeding is the best gift a mother, rich or poor, can give her child, as well as herself,” said Shahida Azfar, UNICEF’s acting Deputy Executive Director. “As we celebrate Mother’s Day, we must give the world’s mothers the support they need to breastfeed.”

According to the study, 99 per cent of babies in Bhutan, Madagascar and Peru are breastfed at least once. But this rate is only 55 per cent in Ireland, 74 per cent in the United States and 77 per cent in Spain.

The US alone accounts for more than one-third of the 2.6 million babies in high-income countries who were never breastfed.

Even within low-and-middle-income countries, babies from the poorest families are more likely to be breastfed for a longer period of time, than those from wealthier families.

Factors leading to higher breastfeeding rates vary around the world, say UNICEF. India and Vietnam have put in place strong policies to protect and promote breastfeeding. Turkmenistan has high rates of mothers giving birth in hospitals where maternal services are prioritized – officially designated by UNICEF as baby-friendly hospitals. Almost all mothers in New Zealand and Sri Lanka give birth at a baby-friendly facility.

Additionally, cultural and social norms play a decisive role, including varying levels of support from fathers, families, employers and communities at large.

Through its Every Child ALIVE campaign, UNICEF urges governments, the private sector and civil society to increase funding and awareness to raise breastfeeding rates from birth, through the age of two.

The agency also outlines other factors which can effect breastfeeding rates, such as introducing strong legal measures to regulate the marketing of infant formula and other breastmilk substitutes; enacting paid family leave and putting in place workplace breastfeeding policies, including paid breaks for new mothers. 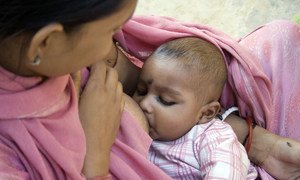