IAEA/Paolo Contri
The Busher nuclear power plant in Iran.
8 May 2018
Peace and Security

Following a decision on Tuesday by the United States to withdraw from the 2015 nuclear agreement with Iran, the United Nations chief said he was “deeply concerned” by the move, and called on all parties to preserve the deal.

President Donald Trump made the announcement at the White House, and immediately afterwards signed a memorandum to begin reinstating economic sanctions on Iran at “the highest level”.

In a statement released shortly afterwards, UN Secretary-General António Guterres said: “I am deeply concerned by today’s announcement that the United States will be withdrawing from the Joint Comprehensive Plan of Action (JCPOA) and will begin reinstating US sanctions.”

“I have consistently reiterated that the JCPOA represents a major achievement in nuclear non-proliferation and diplomacy and has contributed to regional and international peace and security,” he added.

The JCPOA – reached by Iran, China, France, Germany, Russia, the United Kingdom, the US and the European Union – sets out rigorous mechanisms for monitoring restrictions placed on Iran’s nuclear programme, while paving the way for the lifting UN sanctions against the country.

“It is essential that all concerns regarding the implementation of the Plan be addressed through the mechanisms established in the JCPOA,” Mr. Guterres stressed, adding that “issues not directly related to the JCPOA” should be addressed separately.

The UN chief called on other JCPOA participants to abide fully by their respective commitments and on all other Member States to support the agreement.

Earlier this month, the International Atomic Energy Agency (IAEA) released a statement via its Spokesperson, reiterating the fact that according to its December 2015 Board of Governors report, “the Agency had no credible indications of activities in Iran relevant to the development of a nuclear explosive device after 2009.”

At the Board of Governors meeting in March this year, IAEA chief Yukiya Amano said Iran was still abiding by the deal and IAEA inspectors had been given access to all sites and locations, upon request. “If the JCPOA were to fail, it would be a great loss for nuclear verification and for multilateralism,” he said.

♦ Receive daily updates directly in your inbox - Subscribe here to a topic.
♦ Download the UN News app for your iOS or Android devices.
iran|JCPOA 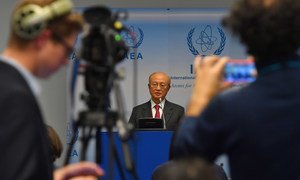 Iran is implementing a series of commitments under the nuclear agreement reached with key countries in 2015, the head of the United Nations nuclear energy agency said Monday.