ILO Photo
A photograph of the city of Beijing. According to the ESCAP Economic and Social Survey of Asia and the Pacific, China is estimated to register a 6.9 per cent real GDP growth in 2017.
7 May 2018
Economic Development

Economies in the Asia-Pacific region registered robust growth in 2017 and prospects for this year look promising, the United Nations development arm in the region said, urging countries to take advantage of positive conditions and address underlying vulnerabilities.

Recent strong growth can also provide resources critical to realizing the ambitious 2030 Agenda for Sustainable Development, said the UN Economic and Social Commission for Asia and the Pacific (ESCAP).

“The prospects for mobilizing financing for development purposes are promising,” said Shamshad Akhtar, the Executive Secretary of ESCAP, which is based in Thailand.

According to the Economic and Social Survey of Asia and the Pacific – ESCAP’s long-running flagship publication – developing economies are on track to record an overall growth rate of 5.8 per cent in 2017, compared with 5.4 per cent the previous year.

For 2018 and 2019, these economies are projected to grow by 5.5 per cent, with concern over debt levels in China offset by a recovery in India and steady performance in the rest of the region.

The report also made the case for the use of so-called macroprudential measures (measures which look at the financial system as a whole) to mitigate risks and keep economies stable.

“Lifting productivity will require a ‘whole-of-Government approach’ for fostering science, technology and innovation and investments in relevant skills and infrastructure,” urged ESCAP, highlighting the need to strengthen social protection and efficient use of resources.

Tax reform and strengthening tax collection could also add as much as 8 per cent to the gross domestic product (GDP) of countries such as Myanmar or Tajikistan; and about 3 to 4 per cent in larger countries, like China, India or Indonesia, according to ESCAP. 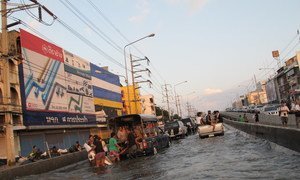 Economic losses to disasters in Asia and the Pacific could exceed $160 billion annually by 2030, the United Nations development arm in the region warned on Tuesday, urging greater innovation in disaster risk financing.