The largest cholera vaccination drive in history targeting two million people across Africa is underway, the United Nations announced on Monday, in response to a series of recent deadly outbreaks of the water-borne disease.

“Oral cholera vaccines are a key weapon in our fight against cholera,” said Tedros Adhanom Ghebreyesus, head of the World Health Organization (WHO) in a statement, “but there are many other things we need to do to keep people safe.”

“WHO and our partners are saving lives every day by improving access to clean water and sanitation, establishing treatment centres, delivering supplies, distributing public health guidance, training health workers, and working with communities on prevention,” he added.

The drive targets Zambia, Uganda, Malawi, South Sudan and Nigeria, and will be completed by mid-June.

The vaccines are funded by the Vaccine Alliance, a public-private partnership known as Gavi, and were sourced from the global stockpile.

The burden of cholera remains high in many African countries. As of 7 May, there are at least 12 areas or countries, reporting active cholera transmission in sub-Saharan Africa.

Since the beginning of this year, WHO has led the way providing technical expertise and guidance, working closely with Health Ministries and other partners in the five target countries to plan and implement the vaccination campaigns. The ambitious effort is part of a global push to reduce cholera deaths by 90 percent by 2030.

In the 15 years between 1997 and 2012, a modest 1.5 million doses of cholera vaccines were used worldwide. In just the first four months of this year, more than 15 million doses have been approved for use globally.

Oral cholera vaccine is normally administered in two doses. The first gives protection for six months, the second for between three and five years.

“Every rainy season, cholera springs up and brings devastation to communities across Africa,” said Matshidiso Moeti, WHO’s Regional Director for Africa. “With this historic cholera vaccination drive, countries in the region are demonstrating their commitment to stopping cholera from claiming more lives. We need to build on this momentum through a multisectoral approach and ensure that everyone has access to clean water and sanitation, no matter where they are located.”

A resolution on further action to combat cholera will be proposed by Zambia and Haiti at this month’s World Health Assembly in Geneva, calling for renewed political will and an integrated global approach to eliminate cholera, including more investment in clean water, sanitation and hygiene. 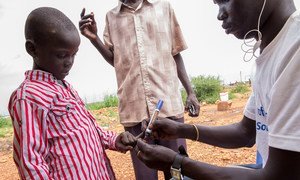 The United Nations migration agency and its partners are set to begin a second round of an oral cholera vaccination campaign in Malakal and Wau, South Sudan, after the initial round reached more than 60,400 people in March of this year.