The United Nations human rights chief on Thursday expressed hope that Ethiopia continues its economic development in which human rights are respected and people can freely speak their minds about public policies.

“We all want to see an Ethiopia with continuous economic development where all people benefit, and where people express their views on public policies, unafraid,” said UN High Commissioner for Human Rights Zeid Ra’ad Al Hussein at the end of his official visit to Ethiopia.

His visit followed the country’s recent transition of power from the Government led by Hailemariam Desalegn, who abruptly resigned as prime minister in March, to the new one led by Abiy Ahmed.

A country with one of the fastest-growing economies in world, Ethiopia has also been riven by human rights violations and oppression on protests by those demanding equality.

“Moments of transition are rarely ever smooth. Ethiopia has struggled with a heavy history, but it has the wisdom of a tolerant, vibrant, youthful population to harness,” said Mr. Zeid, encouraging the authorities to keep the positive momentum going and to keep translating the inspiring words in the Prime Minister’s inaugural address into action.

Mr. Zeid was referring to the Prime Minister’s recognition that there is a “need to address existing inequities that led to recent unrest,” that “democracy cannot be realised in the absence of rights – be it civil or economic rights” and that the “right of people to express opinions, rights of people to organise themselves and engage in effective dialogue and participate in the governance system is inherent in our humanity…not for any government to bestow…as it sees fit.”

The UN rights chief also welcomed the release of a large number of people, including bloggers, political opponents and others who had been detained in relation to their participation in protests and their criticism of the Government.

“There was tremendous hope, but also anxiety,” he said, citing the words of a former political detainee, who said: “we have repeatedly been victims of broken promises.”

In this 70th anniversary year of the Universal Declaration of Human Rights, when too many leaders risk reversing hard-won human rights gains, we look to Ethiopia to continue to give cause for optimism and hope – UN rights chief

During a visit to the Oromia region, Mr. Zeid met with the regional authorities and the traditional leaders, known as the Aba Gadas, who he said spoke about how they will continue to push for the truth to be told about what has happened over the past few years, including deaths during protests.

“They demanded investigations and accountability for excessive use of force by the authorities. They expressed their desire for justice and human rights for all Ethiopians and for their voices to be heard without fear of reprisal,” Mr. Zeid said.

On Wednesday, the UN Human Rights Office for East Africa and the Ethiopian Government signed an agreement to strengthen the Office’s ability to do human rights work in the country and the region.

The Office has already offered its assistance in revising the charities and societies proclamation, the anti-terrorism legislation and the mass media laws.

“In this 70th anniversary year of the Universal Declaration of Human Rights, when too many leaders risk reversing hard-won human rights gains, we look to Ethiopia to continue to give cause for optimism and hope,” Mr. Zeid said. 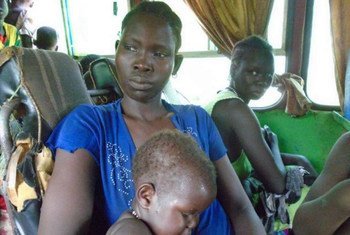