United Nations experts have urged Viet Nam not to crackdown on civil society or stifle dissent, after the authorities jailed several human rights defenders for “conducting activities to overthrow the people’s government” – a charge that carries the possibility of the death sentence or life imprisonment.

These activities have received rulings, with the founder of Brotherhood for Democracy, Nguyen Van Dai, sentenced to 15 years in prison and five years of house arrest. The defenders have two weeks to appeal against the sentences.

“We are deeply concerned at the way these peaceful campaigners have been treated and in particular, over the use of Article 79 of the 1999 penal code of Viet Nam,” which carries the possibility of the death sentence or life imprisonment, the experts said.

Two human rights lawyers were arrested in 2015 while attempting to meet European Union delegates before an annual EU-Vietnam Human Rights Dialogue. Another four activities were arrested in July 2017 amid a general crackdown on freedom of expression.

Created in 2013, the Brotherhood for Democracy consists mostly of former jailed dissidents who set up an online group calling for democracy.

The UN experts are particularly concerned that all six were held in pre-trial detention with very limited access to legal counsel, in a clear breach of international human rights standards, and that they were prosecuted in relation to their activities as human rights defenders and pro-democracy activists.

In 2017, there was a substantial increase in the number of arrests and detentions of human rights defenders in Viet Nam.

“We urge the authorities not to crack down on civil society to muzzle dissenting voices and stifle the people’s rights to freedom of expression and peaceful assembly and association in violation of the country’s obligations under international human rights law,” the experts stressed. 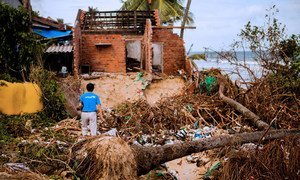 More than a week after Typhoon Damrey battered south-central Viet Nam, assessments by United Nations aid agencies have revealed that vulnerable populations – including children, and pregnant and nursing mothers – in poor and remote areas are still underserved by relief efforts.