UN Photo/Mark Garten
Secretary-General António Guterres (centre) holds townhall meeting in connection with the sixty-second session of the Commission on the Status of Women.

The United Nations has embarked on an initiative to address the male-dominated power structure within its own ranks and now has more women than men in the senior management team, Secretary-General António Guterres told civil society activists on Tuesday.

“The struggle for gender equality is a tough struggle, and obviously it is tougher when we look at it from the perspective of Governments and institutions,” Mr. Guterres said during a town hall-style discussion at UN Headquarters in New York, an event held on the margins of the 62nd session of the UN Commission on the Status of Women (CSW62), the UN’s largest gathering on gender equality.

“So it is civil society that is indeed being in the forefront of this struggle... Without civil society leadership and pressure, I doubt we would be where we are today,” he added.

The Commission is taking place from 12 to 23 March, with the theme, ‘Challenges and opportunities in achieving gender equality and the empowerment of rural women and girls,’ bringing together global leaders, non-governmental organizations, private sector actors, UN partners and activists from around the world.

The UN chief stressed that the Organization must reach gender parity, starting from the upper echelons, noting that his Executive Office now has a staff ratio of 56 per cent for women against 44 per cent for men. The female-male ratio was 40 per cent to 60 per cent when he started as the top executive.

At the most-senior management level, gender parity was reached last month – for the first time in UN history – with 23 women against 21 men.  “This is the clear symbol that when I talked about gender parity, it is not just an intention,” he said.

In April, he expects to increase the proportion of female resident coordinators from 47 per cent now to 50 per cent.

The next target for gender parity is the ranks of Special Representatives and Envoys, in which only one third of positions are held by women.

He also said he has issued a roadmap to achieve full gender parity in 2028, having already asked all UN departments and agencies to present their plans.

Mr. Guterres also said he is addressing the problem of UN staff sexually exploiting and abusing the people they serve as well as sexual harassments happening within the UN.

Calling the townhall-style meeting an opportunity to build the relationship between the Organization’s leadership and civil society, UN Women Executive Director Phumzile Mlambo-Ngcuka said it is “part and parcel of our movement” to work with you in different parts of the world.”

She highlighted that there were an increased number of woman participating from rural areas.

“This is the tipping point,” she said, “this is the constituency we are discussing in this CSW that is critical for ensuring we leave no one behind.”

In the question-and-answer portion of the event, one participant asked Mr. Guterres for specific actions on how all women, girls, gender non-conformists, those at risk and other marginalized groups, would “truly not be left behind.”

Admitting that “we have a hard job in front of us,” the UN chief pointed out that the world has a long way to go before gender equality could be ensured. He noted that many countries have abhorrent penal mechanisms, saying that the UN denounces those situations, adding “our role is advocacy.”

A representative from feminist group YWC World explained how some of her “sisters” were unable to attend. Ticking off members’ names from Nepal, Iran and South Sudan, she asked how the UN could justified having CSW in the US – with its travel bans and visa denials.

Mr. Guterres agreed that it was a serious question, especially since the UN wants civil society represented. He said that unfortunately visa denials and travel bans still exist although the Organization “engages actively with governments to solve it,” and will do everything it can to avoid them.

An indigenous Guatemalan woman asked what the UN chief would do to guarantee the Organization’s technical support and economic resources for women’s and indigenous women’s organizations globally to improve the conditions for women and girls.

Acknowledging that not enough has been done in this area, Mr. Guterres said that in the context of human rights instruments and economic and social resources, there are “action plans that are geared to the rights of indigenous people and those that are most vulnerable, which includes women,” conceding that the programmes are smaller than they should be, given the real need. 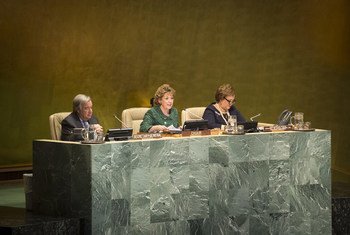