UN Photo/Loey Felipe
Tarcila Rivera Zea (left), President of the Centre for Indigenous Cultures of Peru (CHIRAPAQ) and a member of the UN Women Global Civil Society Advisory, Group and Purity Soinato Oiyie (right), a Kenyan activist, address the opening meeting of the sixty-second session of the Commission on the Status of Women (CSW), 12 March 2018.
12 March 2018
Women

As #MeToo activists continue to push for political, economic and social equality between the sexes, a key question is being asked: Are marginalized women and girls – ones who are part of indigenous communities, disabled, or part of the lesbian and transgender community – being heard?

“We all need to step up now. If there can be any ray of light, it’s that these issues are finally out in the open. Gender-based violence can no longer hide in the shadows,” said Neven Mimica, European Commissioner for International Cooperation and Development, in his opening remarks to a special event held on the margins of the Commission on the Status of Women (CSW62), whose two-week programme opened today at United Nations Headquarters in New York.

Mr. Mimica is one of the founders of the Spotlight Initiative, which was launched by the European Union (EU) and the UN in September of last year, with an initial investment of EUR 500 million. Its goal is to eliminate all forms of violence against women and girls around the world.

Speaking at the Spotlight Initiative special initiative, Mr. Mimica noted that a revolution of refusal and a push to stop accepting the unacceptable was underway. But unless each person acts, all the current struggles will be in vain.

“When my granddaughter looks back, I want to be able to say that we didn’t despair, but that we accepted the call to action,” he told a UN hall, packed with civil society leaders and equality champions from around the world, including Helga Schmidt, Secretary General of the European External Action Service (EEAS).

Following his address, activists from Fiji, Guatemala, Kenya, and Peru, as well as UN official Dubravka Simonovic, UN Special Rapporteur on Violence against Women, would take the stage and discuss concrete problems in their regions – from infanticide, to brutal rapes and killings, and a continued reliance of silos in the fight against violence.

The event moderator was journalist Munizae Jahangir, whose late mother, Asma Jahangir, was a leading Pakistani rights activist and founder of the Human Rights Commission of Pakistan.

“My sister would ask – why are you willing to be in prison just to make sure that women’s rights come one hour earlier. We’re still struggling for women’s rights to come a half-hour earlier,” Ms. Jahangir said.

Deputy Secretary-General Amina Mohammed, who had earlier given a keynote address to the session, brought up additional issues, such as problems with identification and citizenship, and the need to build institutions and collect more data related to the many forms of violence affecting women and girls.

She noted that beginning later this year, the Spotlight Initiative would launch among its first projects – in Central and South America.

The chosen countries include El Salvador and Honduras, which have been listed as among the world’s deadliest countries for women based on the number of hundreds of confirmed killings – though the unofficial numbers are likely even higher.

“We’re taking violence out of the shadow and into the spotlight. We’re coming for it, in all its manifestations around the world,” the Deputy Secretary-General said, “We’re creating a world in which all women and girls can walk free and tall in safety and dignity.”

In an interview with UN News earlier in the day, Ms. Mohammed and Mr. Mimica said that the first fist months of the Spotlight Initiative have already been successful.

“A lot of preparation has gone on not to re-invent but to on existing initiatives that we have,” noted Ms. Mohammed. “This is where expertise is, bringing our key stakeholders in civil society and partners. So effectively, we are building capacity, as well, and we are bringing this to zero, as we would like to do that – eliminating all forms [of violence against women and girls].”

Looking longer-term, Mr. Mimica pointed to good existing cooperation with other teams and development partners. The EU is the biggest global provider of official development assistance.

“We are very confident that the UN family, the UN as a one could be the best partner against violence against women and girls. We invite others to join forces – from other countries across the globe to civil society – but we had to partner with the UN to create this synergy to bring our good intentions, our good programs, down to earth, down to community level and that’s what we are doing right now.”

♦ Receive daily updates directly in your inbox - Subscribe here to a topic.
♦ Download the UN News app for your iOS or Android devices.
gender|women 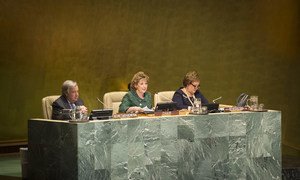