UN Migration Agency (IOM) 2017
The International Organization for Migration (IOM) in close coordination with the Ministry of Migration and Displacement in Iraq is distributing non-food item kits to families in Al Habanyah displaced from west Anbar.
21 February 2018
Migrants and Refugees

As Governments begin to negotiate a global compact on migration, an accurate portrayal of migrants, and of migration, is needed more than ever before to help shape public discourse and policy, senior United Nations officials said Wednesday, underscoring the importance of an evidence-based approach to the issue.

“Over the long-term the evidence is clear: the benefits of migration vastly outweigh the challenges. And without a clear understanding of migration, negative narratives surround migrants,” Louise Arbour, Special Representative of the Secretary-General for International Migration told a multi-stakeholder event held at the UN Headquarters.

“We must not allow xenophobic political narratives about migration distort our objective to enhance international cooperation on migration,” she added, stressing that “it is only with facts and context that we can have a respectful and realistic discussion about migration, one that pushes back on the many inaccurate and negative narratives being touted for short-term political gains and misguided policies.”

The event, titled ‘Facts instead of Perceptions: Promoting an Evidence-Based Discussion on Migration,’ comes on the heels of the start of intergovernmental negotiations on the Global Compact for Safe, Orderly and Regular Migration – the first such international instrument on the issue – to be adopted later this year.

Ms. Arbour said that there are currently 258 million international migrants today, 3.4 per cent of the global population, an increase from 2.8 per cent in 2000, and the figure is expected to increase in the coming decades.

The McKinsey Global Institute estimates that migrant workers in higher-productivity settings contributed $6.7 trillion – or 9.4 per cent – to global GDP in 2015, $3 trillion more than they would have produced in their countries of origin.

UN Photo/Manuel Elías
Louise Arbour, Special Representative for the Secretary-General on Migration (centre) and Miroslav Lajčák, President of the General Assembly (centre right) address the fourth informal interactive multi-stakeholder hearing of the Intergovernmental Conference and its preparatory process to adopt a global compact for migration.

In 2017, nearly $600 billion was remitted internationally – three times greater than all development assistance. Some $450 billion of that was sent to developing countries. And even with these large sums, migrants put 85 per cent of their earnings back into host countries through taxes and spending, Ms. Arbour said.

“Migrants are frequently presented as security threats, but they are statistically less likely to be involved in crime than local populations,” she stressed, adding that there are, of course, those instances when international migration might have negative impacts: when large inflows of migrants have short-term destabilizing effects on local labour markets if they are not properly regulated.

For his part, General Assembly President Miroslav Lajcak said that Governments should make decisions and policies on migration based on the latest, and most concrete analysis and information, also underscoring the important roles the UN and other partners can play in promoting an evidence-based approach to the issue.

“And we need to respond accordingly. Not with ideas or theories. But with facts. Data. Information. And evidence,” he added.

Mr. Lajcak said that during the Compact’s consultation phase, there were repeated calls for more disaggregated data on migration.

He warned when facts and information are absent, a vacuum develops in their place, and the vacuum can quickly be filled by emotional rhetoric, politicized messaging, or even hate speech.

The private sector, civil society, regional organizations and the UN can act as crucial sources of data and facts needed for Governments to make decisions and policies on migration, he stressed.

Furthermore, an objective media is key because it can distil sometimes technical, or complex, data down to information products, which are accessible to wider audiences.

“We must do more to build partnerships between all these key players,” Mr. Lajcak said, highlighting the need to ensure that data collection and disaggregation receives proper funding and support.

♦ Receive daily updates directly in your inbox - Subscribe here to a topic.
♦ Download the UN News app for your iOS or Android devices.
migrants|migration 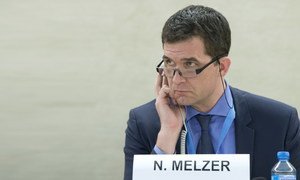 With hundreds of thousands of migrants who arrived in the United States as children facing possible expulsion, a group of United Nations human rights experts has urged the country to take urgent steps to address their situation and ensure that their rights are protected.