IFAD/Sanjit Das/Panos
A woman at a shop selling vegetables and produce grown by local farmers in a rural village in Surkhet district, Nepal.
13 February 2018
Economic Development

Amid a global rise in hunger and poverty on back of the impacts of climate change and conflict, the United Nations rural development agency today announced an ambitious target to generate resources to fund loans and grants to enable millions in developing countries strengthen their food security and livelihoods.

The total, $3.5 billion, announced Tuesday by the 176 member States of the International Fund for Agricultural Development (IFAD) will enable the UN agency expand its projects and programmes to benefit 47 million smallholder farmers with improved technology, finance and knowledge; improve market access for 46 million; and build resilience to climate change impact of another 24 million.

“To achieve these goals, we will intensify our work on climate, nutrition and gender –  key focus areas which will be mainstreamed across our portfolio,” said IFAD President Gilbert F. Houngbo.

“We will also sharpen our focus on youth employment in order to meet one of the most pressing challenges faced by the world today.”

The renewed commitment from IFAD member States could not come at a more critical moment.

Last September, newly released figures showed that hunger increased for the first time in 10 years affecting 815 million people in 2016, up 38 million from 2015 because of climate change and protracted crises.

Furthermore, as nearly 75 per cent of the world’s poorest and hungry people live in rural areas, almost 90 per cent the contributions will go to lower-income and lower-middle income countries. An estimated 25 to 30 per cent will be invested in fragile situations.

“We believe that IFAD has a unique role to play, not only as an investor but as a trusted broker, an assembler of development finance, and a proven innovator sharing its knowledge and expertise,” said Mr. Houngbo.

A specialized agency of the UN, IFAD is devoted exclusively to investing in rural areas and harnessing the potential of smallholder farmers and other rural people to contribute to sustainable development.

Since its founding in 1977, IFAD has received approximately $8.5 billion in member State contributions, which have financed investments of $19.7 billion and mobilized a further $27.1 billion from domestic and international partners. From 2010-2015, it is estimated that IFAD-supported projects lifted 24 million people out of poverty.

♦ Receive daily updates directly in your inbox - Subscribe here to a topic.
♦ Download the UN News app for your iOS or Android devices.
agriculture and food security|rural development 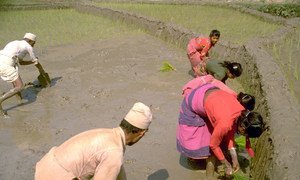 Over 14,000 farmers in rural Nepal to benefit from new UN project

Thousands of family farmers are expected to benefit from a United Nations Development Programme (UNDP) initiative in Nepal that uses an innovative approach to build both the farmers’ capacities as well as add value to their products.