United Nations Secretary-General António Guterres on Thursday highlighted the importance of engagement and empowerment to transform the Sustainable Development Goals (SDGs) into benefits for all people worldwide and called on all sectors of the society to actively involve themselves in this endeavour.

Speaking at the inaugural Global Engagement & Empowerment Forum on Sustainable Development, held at Yonsei University in Seoul, the capital of the Republic of Korea, the Secretary-General stressed that efforts to implement the 2030 Agenda for Sustainable Development need to “go beyond diplomatic efforts and Government programmes.”

The civil society, academia and the private sector – all have to be mobilized – to find the resources needed to achieve the Goals and apply them in the best possible bay.

Mr. Guterres also cautioned against rising inequality across the globe and said that this feeling of being “left behind” undermines the confidence of people, communities and regions, in governments as well as international organizations like the UN.

He told the audience, which included former Secretary-General Ban Ki-moon and the President of the General Assembly Miroslav Lajčák that this undermining of trust ultimately results in increased instability.

“This means that we need enormous efforts, engagement and empowerment to make the blueprint of the SDGs the tools with which we are able to reach a fair globalization,” said the UN chief.

He also highlighted that financing is critical to ensure that there are sufficient resources to implement the sustainable development agenda and in that context, urged the international community to strengthen their fight against tax evasion, money laundering, and illicit flows of capital.

For instance, in Africa, these illicit activities account for more than total official development aid (ODA) that flows into the continent, said Mr. Guterres.

It is critical that everyone joins into these discourses to ensure that we can translate all these new tools into tools that work for the improvement of humankind, said Mr. Guterres.

While at Yonsei University, Secretary-General Guterres also held a meeting with his predecessor, Ban Ki-moon.

Also today, the current and former Secretaries-General, along with the President of the General Assembly, met with met with the Prime Minister of the Republic of Korea, Lee Nak-yon.

Touring Olympic village at #PyongChang2018, I was moved to see people from different cultures, different religions and different ways to see the world, all ready to compete in the Olympic spirit. We could use more of that spirit of solidarity & mutual respect all over the world. pic.twitter.com/fEhDZjfmJf
— António Guterres (@antonioguterres) February 8, 2018

Departing Seoul, the Secretary-General and his delegation drove to the site of the PyeongChang Olympic Winter Games. On site, he toured the Olympic village at Gangneung, where he was able to meet with a number of athletes, including Cheyenne Goh, the first Singaporean ever to qualify for the Olympic Winter Games. The Secretary-General also met and encouraged competitors from Switzerland, Hungary and China.

In the evening, the Secretary-General attended the official dinner hosted by the President of the Olympic Committee, Thomas Bach, for visiting dignitaries. 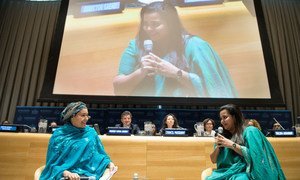 Without young people, Global Goals will not be achieved, UN forum told

Today's young people are more connected, dynamic and engaged than ever and the Global Goals can’t happen without them, speakers told an annual United Nations forum, where young leaders called on the Organization keep its promise to ‘leave no one behind’ on the road to creating a prosperous wolrd for everyone on a clean planet.