Somali refugee ZamZam Yusuf has a message for any neighbours who think she doesn’t have the right to call Leicester, in the English Midlands, home.

“I would like to offer you a cup of tea” at my house, says the 30-year-old mother-of-four, who came to United Nations Headquarters in New York in January, as world leaders prepare to debate the first-ever Global Compact for Migration.

Her university, De Montfort, in the United Kingdom, has taken the academic lead in furthering the UN’s Together campaign on behalf of the millions who are on the move, whose basic rights are being denied.

A summit in New York on 9 January aimed to raise awareness and encourage debate on the current challenges faced by refugees in local communities. Led by De Montfort, the universities shared ideas for practical ways they can use skills, experience and voluntary power on their campuses to support those in need in their local areas.

Too often, said UN chief António Guterres – launching his 2018 report, Making Migration Work for All – their positive contribution is being overshadowed by the plight of a “desperate minority” forced to live in the shadows by countries that violate their rights.

ZamZam came in to our the Lid is on studio in New York to describe her extraordinary journey – just one of the millions that are being taken each year, in search of a better life.

AUDIO: Somali refugee ZamZam Yusuf describes her extraordinary journey, just one of the millions that are being taken each year, in search of a better life. 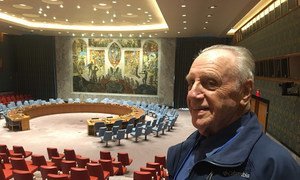 PODCAST: 'UN can save the world' say veteran staffer, still passionate for peace at 90

He was one of the very first UN staff members, and 72 years on, Robert Kaminker is still advocating for peace and the power of the Organization to ultimately “save the world.”