According to Rupert Colville, the spokesperson for the Office of the UN High Commissioner for Human Rights (OHCHR), 136 civilians and non-combatants – including women and children – have been killed and another 87 injured in airstrikes in Sana'a, Sa'ada, Al Hudaydah and Taizz governorates in the period from 6 to 16 December.

“They should take all feasible precautions to avoid, and in any event to minimise, the impact of violence on civilians,” he stressed.

Among the incidents verify by OHCHR, four civilians were killed and four injured on 9 December when coalition airstrikes hit the official Yemen TV channel, Qanat Al Yemen, which has been under the Houthis control since September 2014.

[The parties to the conflict] should take all feasible precautions to avoid, and in any event to minimise, the impact of violence on civilians – OHCHR spokesperson Rupert Colville

At least another seven civilians were killed when airstrikes struck a hospital in Al Hudaydah on 10 December. Some Houthi military vehicles were reported to be next to the hospital compound at the time of the airstrikes.

On 13 December, coalition airstrikes struck a prison building and a prison yard at a military police compound in the Shaub district of Sana'a, killing at least 45 people and injuring 53. All victims were reported to be detainees and said to belong to resistance forces loyal to President Abd-Rabbu Mansour Hadi.

The airstrikes also claimed the lives of a number of children.

On 16 December, nine children and one woman – returning home from a wedding party – were killed in coalition airstrikes in Marib governorate and another 14 children died when airstrikes hit a farmhouse in Al Hudaydah governorate.

Also at the briefing, the OHCHR spokesperson expressed concern over reported recent violations by Houthis against members of former President Saleh's political party, the General People's Congress (GPC) including attacks and arbitrary detentions.

“There have also been unconfirmed reports of summary killings and detention of people affiliated to the GPC, although verification of these reports by our Office has been difficult as witnesses fear possible repercussion from the Houthis,” said Mr. Colville.

Since the eruption of violence in Yemen in March 2015 and as of 14 December, the UN rights office has documented total of 5558 civilians killed and 9,065 injured. 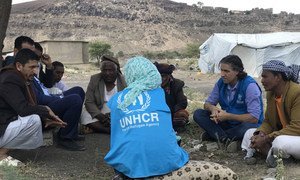 As hostilities intensify in frontline areas on Yemen’s west coast, the United Nations refugee agency said Friday that it is bracing for further displacement and a spike in humanitarian needs.