Expressing deep shock at a mass execution of 38 men at a prison in the Iraqi city of Nassiriya, the Office of the UN High Commissioner for Human Rights (OHCHR) has called on the country to establish an immediate moratorium and carry out an urgent and comprehensive review of its criminal justice system.

“The mass execution […] once again raises huge concerns about the use of the death penalty in the country,” Liz Throssell, an OHCHR spokesperson, told the media at a regular news briefing in Geneva Friday.

“Given the flaws of the Iraqi justice system, it appears extremely doubtful that strict due process and fair trial guarantees were followed in these 38 cases,” she added.

All prisoners had been convicted for terrorism-related crimes. They were executed Thursday.

Also in her briefing, Ms. Throssell said that the executions and the fears over due process and fair trial guarantees raised the dangers of “irreversible miscarriages” of justice and violations of the right to life.

The UN rights office has time and again raised concerns over the continued use of death penalty in the country.

So far this year, it has been informed of 106 executions in the country, including the mass hanging of 42 prisoners in a single day in September, the spokesperson added.

“We once again urge the Iraqi authorities to halt all executions, establish an immediate moratorium on the use of the death penalty and carry out an urgent and comprehensive review of the criminal justice system,” she added. 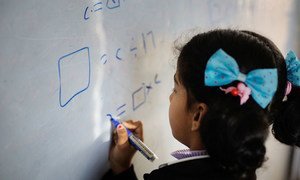 Voicing concern over proposed amendments to laws governing marriage in Iraq – in particular the ambiguity over the legal age of marriage – senior United Nations officials called on the country to ensure adequate protection for children across Iraq.