The United Nations human rights wing has called on the Latin American nation, El Salvador, to immediately halt the application of a law that unduly penalizes women for abortion-related offenses and to review all cases to ensure their compliance with international human rights standards.

According to the Office of the UN High Commissioner for Human Rights (OHCHR), at least 42 women have been convicted of attempted or aggravated homicide after suffering miscarriages or other complications under the Penal Code since 1988.

The law, which a spokesperson for OHCHR described as “one of the most draconian abortion laws in the world” completely prohibits access to abortion regardless of the circumstances, including if a woman's life is at risk or if she has suffered sexual violence.

The specific section of the Penal Code is Article 133.

In one of the most recent instances, on Wednesday, the Second Appeal Court of San Salvador upheld a 30-year prison sentence against Teodora Vasquez for aggravated homicide.

Ms. Vasquez was in the ninth month of her pregnancy when she suffered intense pain, and called the emergency services before passing out. She awoke to find her baby had been stillborn. She was accused of deliberately ending her pregnancy and was sentenced to 30 years in prison in January 2008.

During his visit to El Salvador last month, the UN High Commissioner for Human Rights, Zeid Ra'ad Al Hussein, met with Ms. Vasquez and three other women at the Ilopango women's rehabilitation centre.

They all had suffered miscarriages or other obstetric emergencies.

According to the UN rights office, women in poverty are worst impacted.

“It is important to highlight here, as the High Commissioner has done, that El Salvador's Penal Code disproportionately affects women living in poverty, such as Teodora,” said Liz Throssell, the OHCHR spokesperson.

“We have not seen women from wealthier backgrounds jailed under similar circumstances in El Salvador,” she added, calling on the country to comply with its international human rights obligations and lift the absolute prohibition on abortion. 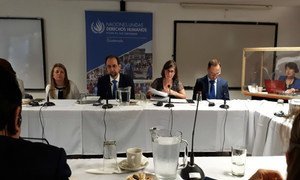 At the end of his first visit to El Salvador, the United Nations human rights chief on Friday highlighted the Government's stated commitment to human rights, as well as several issues facing the Central American country, including the highest rate of femicide in the region and the abortion ban that punishes women “for apparent miscarriages and obstetric emergencies.”