A child carries his younger sister on his back. Both children are living on the street in Aweil, South Sudan. UNICEF/Rich
15 December 2017
Peace and Security

South Sudan's children are facing a raft of daily horrors and deprivations and urgently require a peaceful, protective environment, the United Nations Children's Fund (UNICEF) said Friday, warning that “anything less, places children and women at even greater risk of grave violations and abuse.”

As the conflict in the world's youngest country enters its fifth year, UNICEF said in a new report entitled Childhood Under Attack, that more than half the children of South Sudan are "in the throes of tragedy" – victims of malnutrition, disease, forced recruitment, violence and the loss of schooling.

"No child should ever experience such horrors and deprivations," said Leila Pakkala, UNICEF's Regional Director in Eastern and Southern Africa, "and yet children in South Sudan are facing them on a daily basis.

Years of insecurity and upheaval have had a 'staggering impact on children,' threatening an entire generation, according to the report entitled.

The numbers tell a grim story, said UNICEF, noting that almost three million children are severely food insecure; more than one million acutely malnourished; 2.4 million forced from their homes; two million out of school, and if the current situation persists, only one in 13 children are likely to finish primary school.

Moreover, an estimated 900,000 children suffer from psychological distress; more than 19,000 have been recruited in into armed forces and armed groups; and more than 2,300 have been killed or injured since the conflict first erupted in December 2013 – with hundreds of rape and sexual assault incidents against children having been reported.

Despite the huge challenges faced in a country that ranks among the world's most dangerous for aid workers, UNICEF has been delivering lifesaving assistance to children across the country since the crisis started in December 2013, warning that while it required $183 million in 2018 to provide critical assistance to children and women, currently it is $141 million short.

'Childhood under Attack' in South Sudan fighting | UNICEF
♦ Receive daily updates directly in your inbox - Subscribe here to a topic.
♦ Download the UN News app for your iOS or Android devices.
Sudan 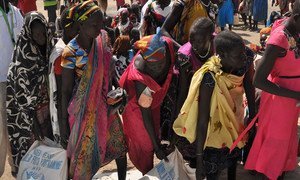 With ‘so much at stake’ in crisis-torn South Sudan, UN and partners launch $1.72 billion appeal

The United Nations relief wing and the humanitarian community in South Sudan launched on Wednesday a $1.72 billion appeal to assist six million people affected by conflict, displacement and hunger.