“The exodus from Myanmar into Bangladesh is the most visible, but innocent civilians still flee for their lives in CAR [Central African Republic], the DRC [Democratic Republic of the Congo], Iraq, South Sudan, Syria and elsewhere,” he continued.

The meeting, which takes place from 12-13 December, is taking stock of the results of the 2016 New York Declaration – a global deal that committed the UN’s 193 Member States to share responsibility for the world’s refugees and hosting communities, including by drawing up a Comprehensive Refugee Response Framework (CRRF).

The High Commissioner noted that throughout the world people are still fleeing their homes – victims of a collective failure by the international community to prevent and resolve conflicts.

The global compact should be the instrument to transform […] commitment into action, so that refugees have a fighting chance to rebuild productive and meaningful lives – High Commissioner Filippo Grandi

“The global attention on refugees may wax and wane amidst the vagaries of international politics, but the New York Declaration remains as a high-level political commitment to change the way we respond to refugee crises,” he said.

“The global compact should be the instrument to transform that commitment into action, so that refugees have a fighting chance to rebuild productive and meaningful lives, and contribute to the communities that host them and to their own futures,” stressed Mr. Grandi.

He called for the compact to change how the international community engages with refugee issues, maintaining that “refugees pay the price” of failure, “as do the handful of countries who bear the brunt of hosting refugees without reliable support from others with greater means,” citing closed borders, restricted access and the politicization of refugee movements.

“At a time when multilateralism is faltering in other spheres, the global compact on refugees is our chance to chart a different course through practical engagement and cooperation based on humanitarian values,” he underscored.

Global compact will build on existing framework for refugee protection

He praised the 13 countries that have already started the CRRF rollout, and those who have participated in reviewing key lessons learned, along with experiences from other large-scale refugee situations and welcomed the results of recent pledging conferences.

Some 500 representatives – including from governments, international organisations, local authorities and civil society – from around the world are expected to attend the talks.

The global compact will build on existing international framework for refugee protection, including the 1951 Refugee Convention, and aims to share more equitably the responsibility for hosting the world’s refugees and helping them to rebuild their lives.

It will set out concrete steps for governments and others to ensure that refugee-hosting communities get the support they need and that solutions to their plight are sought from the start of a refugee situation.

In February, UNHCR will begin with governments and other stakeholders, formal consultations on the compact, which the High Commissioner will propose to the UN General Assembly towards the end of 2018. 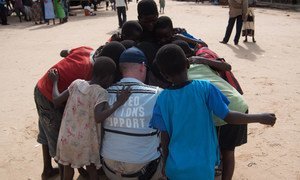 United Nations Secretary-General António Guterres on Friday called for $1 billion in donor contributions to the Organization’s Central Emergency Response Fund (CERF) – a pool of funding that supports critical relief operations in crises around the world – as humanitarian needs have increased from $5.2 billion in 2005 to over $24 billion today.