UN Photo/Isaac Billy
The Victims’ Rights Advocate for the United Nations, Jane Connors, speaking at a press conference in Juba, the capital of South Sudan.
7 December 2017

The relationship between United Nations peacekeepers and civilian staff and the vulnerable people in South Sudan they are working for must be one of mutual trust and confidence, said a senior UN official, noting that instances of sexual exploitation and abuse by UN personnel not only breaks down that relationship, it also destroys the trust communities have in the Organization.

“It is conduct which is absolutely abhorrent and a conduct which is extraordinarily painful to its victims and undermines the UN itself and, of course, dents the trust that communities should have in the UN,” said Jane Connors, the UN Victims’ Rights Advocate, at the end of her visit to the country.

“It is about dignity for the victims, compassion, a real feeling of empathy, a feeling that they are not forgotten – that victims feel they can tell their story to someone like myself and, if they’re lucky, to the Secretary-General as some have been able to do,” she said, adding: “That their hurt, their pain is acknowledged, and we do as much as we possibly can do to make their situation better.”

The Victims’ Rights Advocate is visiting South Sudan to promote the importance of the “no excuses, zero tolerance” approach to UN personnel.

During her visit, she has met with victims and local authorities and spent time listening to the concerns of internally displaced persons residing at the UN Mission in South Sudan (UNMISS) Protection of Civilians’ Sites.

“There should be no victims. Women and girls should not feel pain,” she told crowds of people at the Malakal camp, in the north of the country.

“All I can say is the UN entities, funds, programmes, agencies and the Mission stand with you but you are in the lead to say no and act.”

Globally there were 103 allegations made last year with four in South Sudan.

The low number could be due to reluctance on part of victims to report abuse because of the stigma attached. Therefore it is vital to encourage reporting to ensure perpetrators are held accountable.

“Many victims are focused on their lives, as you know, legal processes take a long time and many victims wish to move on. They are interested in justice, but at the same time, they wish to rebuild their lives, move into a scenario whereby they feel valued, they are not stigmatized, and that is the approach we need to take,” said Ms. Connors.

Ms. Connors was appointed in line with the Secretary-General’s pledge – made in his report on ‘Special measures for protection from sexual exploitation and abuse: a new approach’ – that the UN will put the rights and dignity of victims at the forefront of its prevention and response efforts. 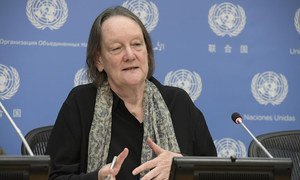