FAO/Rosmon Zokue
Ex-fighters at a training session in Bangui, CAR's capital. The training takes place in Bangui and in regions worst affected by the conflict.
1 December 2017

Over 1,000 ex-fighters in the conflict-riddled Central African Republic (CAR) have traded their weapons for farming equipment, as part of a United Nations initiative, according to the United Nations agriculture agency.

Over 1,000 ex-fighters in the conflict-riddled Central African Republic (CAR) have traded their weapons for farming equipment, as part of a United Nations initiative, according to the UN agriculture agency.

“This initiative is an important step towards reaching peace and restoring hope,” said Jean-Alexandre Scaglia, Food and Agriculture Organization (FAO) Representative in CAR.

The FAO-supported UN programme’s message is simple: stop partaking in violence, put down your weapons and, in exchange, you’ll get help to start a new life. Participants get certified training in gardening, horticulture, rearing chickens and pigs as well as tools, seeds or baby animals.

“We are seeing violence rising again to levels as high as in 2013-2014,” asserted Mr. Scaglia, “so giving armed groups an option, a way out, couldn’t be timelier.”

While some ex-fighters rear chickens or grow and sell vegetables, others repair roads and public infrastructure destroyed by the fighting.

A three-month training programme is held in Bangui, Kaga Bandoro, Bambari and Haute Kotto – regions hardest hit by conflict that still host up to hundreds of thousands of displaced people.

Now, in brightly-coloured rooms in aging town halls or abandoned military quarters, the ex-fighters – men and women who not long ago engaged in a violence that divided the country and horrified the world – diligently sit at their desks, eager to learn.

FAO supports the expansion of the UN initiative for disarmament, demobilisation and reintegration (DDR) and, as part of a new project, will help ex-fighters access micro-credit schemes to start their own businesses.

Renewed violence pushed CAR into its fourth year of conflict as over half a million people have fled their homes across the borders or into sprawling internally displaced persons camps.

One in two people suffers from hunger, detailed the UN agriculture agency.

FAO urgently requires $10 million by February to support more than 350,000 displaced people and vulnerable host communities to resume their agricultural activities and prepare for the March–April 2018 harvesting season by providing them with seeds and tools, and basic veterinary services for their livestock. 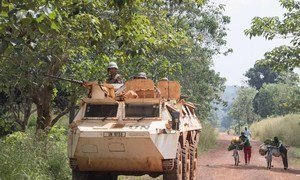 Secretary-General Antonio Guterres has strongly condemned Sunday's attack allegedly perpetrated by the anti-Balaka group against a convoy of the United Nations peacekeeping mission in the Central African Republic, in which one peacekeeper from Egypt was killed and three others were injured.