Interactions between the Sustainable Development Goals (SDGs) will be a core focus of a regional meeting organized by the United Nations office in Beirut, Lebanon on Monday, 20 November.

“This meeting comes at a crucial time when everyone serving under the United Nations flag needs to respond to the UN Secretary-General's ambitious reform agenda,” said Mohamed Ali Alhakim, the Executive Secretary of the UN Economic and Social Commission for Western Asia (ESCWA).

“ESCWA is looking forward to speaking with its partners to decide how together we can address our regional priorities and meet the needs of the millions of people who count on us to improve their social and economic conditions,” he added.

In September, UN Secretary-General António Guterres announced a plan to reform the UN's development system, including increased coordination and accountability to better assist countries through the 2030 Agenda for Sustainable Development.

In response, ESCWA's annual Regional Coordination Mechanism, which includes members from all UN regional agencies and the League of Arab States, will focus special attention on what the proposed reform means for the region as it moves to accelerate its work on the 17 SDGs.

“There are forces that pull the Arab region backwards, obstruct the path to development and sabotage reconstruction efforts,” said Ahmed Aboul Gheit, Secretary-General of the League of Arab States, who will be visiting ESCWA for the first time on Monday.

“On the other hand, there are forces that are firmly promoting change and adopting a reform agenda that stems from the development of societies and people. We commend the governments that are boldly, confidently and steadfastly on the path of reform,” he underlined.

Meanwhile, the UN House in Beirut will also welcome David Griggs, a Professor of Sustainable Development at Monash University in Australia and Warwick University in the United Kingdom. Professor Griggs was heavily involved in the development of the SDGs and is an expert on their synergies and trade-offs.

“Dealing with the interlinkages is absolutely critical,” he explained. “The SDGs are complicated enough with 17 goals and 169 targets; to make matters worse, they all interlink with each other so if you act to achieve one target or one goal in isolation, then you risk missing potential opportunities.”

Professor Griggs highlighted that an obvious example is when seeking to achieve affordable and clean energy (Goal 7), and climate action (Goal 13), renewable energy can have a positive impact on both goals and improve air quality, also helping to reach good health and well-being (Goal 3).

The importance of exploring these “interlinkages” at a regional level will be a focus of his keynote address to UN development experts representing 25 different agencies, funds and programmes.

“Some things you have to do at a national level because the national circumstances are very different,” Professor Griggs continued. “But equally there are transboundary issues—issues that cross national boundaries and are much more cost effective, easier and quicker to work on in regional partnership.”

He noted that this includes transboundary air pollution, water pollution, and climate change, none of which respect national boundaries: “So when you're coming to tackle those kinds of issues, it makes sense at the regional level,” he insisted.

The UN's Regional Coordination Mechanism hosted by ESCWA has been devised for that exact purpose; on Monday, it will examine ways to draw on positive SDG interlinkages while avoiding trade-offs, explore new entry points for UN agencies to collaborate towards increased results and impact, and deliver on the UN Secretary-General's vision towards a better world. 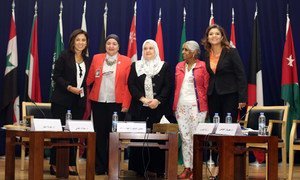 An economic model to estimate the costs of intimate partner violence—the most common form of violence against women in the Arab region—was spotlighted this week at the United Nations’ regional commission in Lebanon.