It’s official, kids have taken over… at least for today – World Children’s Day – celebrated annually on 20 November, which this year marks the twentieth anniversary of the Declaration of the Rights of the Child, and also saw young people take over roles in government, media, and even at the United Nations, to raise awareness about issues important to them.

It’s official, kids have taken over… at least for today – World Children’s Day – celebrated annually on 20 November, which this year marks the twentieth anniversary of the Convention on the Rights of the Child, and also saw young people take over roles in government, media, and even at the United Nations, to raise awareness about issues important to them.

“It’s my job to meet with some of the most powerful and important people in the world,” Secretary-General António Guterres said at a dedicated event at UN Headquarters in New York in a room packed to the rafters with children, teachers, government delegates and a host of others, including the Director-General of the UN Children’s Fund (UNICEF), Anthony Lake.

“Presidents and Prime Ministers… scientists… military leaders… scholars and academics… captains of industry and business. But none of these people are as important – or as inspiring – as the the children I meet,” Mr. Guterres said.

He painted a picture of millions of girls and boys in danger, fleeing deadly conflicts, and going hungry, elaborating on how they are separated from their parents or making long, dangerous journeys to find safety.

“As a global community, we cannot continue failing these children,” he asserted. “So here is my commitment to you: I will spare no effort to make sure that the United Nations is working every day, every hour, every minute, for your best interests.”

“In a world that can so often seem to be a hopeless place, we need children’s hope, more than ever,” Mr. Guterres affirmed.

Keeping adults ‘on the hook’

Mr. Lake spoke with special guest Zari, the muppet who stars in Baghch-e-Simsim, or ‘Sesame Garden,’ the Afghanistan version of Sesame Street.

In a country where only about one-third of girls attend school, they discussed how she is setting an example and inspiring girls to dream big and imagine a future they may not have thought possible. “I love going to school and learning!” she exclaimed.

As children emcees Jaden Michael and Isabela Moner took over the podium, they introduced two youth from Syria, with many high-fives in the mix.

After fleeing Syria, 12-year-old Basel’s family sheltered in Jordan where his father worked two jobs from 6:00 am until midnight every day. Eleven-year-old Nance was four when she walked from Damascus to Jordan.

Now in Canada, Basel has made friends at school and “even learned to love the snow!” Nance lives in the United States where she hopes to become an optometrist, saying “If I become an eye doctor, I can travel back to Syria and other places to help people around the world.”

Emmanuel Elisha Ford took a special seat in the front, drawing attention to the challenges faced by 93 million children globally, noting how they vary from person, to place, to circumstance, to disability.

“In addition to being born blind, I face some mobilities challenges,” he began, saying that despite sometimes needing a wheelchair, he dreams of becoming a meteorologist, calling for “action to change this uneven playing field.”

Twelve-year-old actor Dafne Keen took the podium where she translated from French, what Central African Graciela-Elsie Ouakabo said, explaining that after Graciela’s mother died while Graciela was a baby, and her father killed by Seleka rebels, she was captured by anti-Balaka while fleeing her town. The two warring militias have sparked a dire humanitarian crisis in the Central African Republic (CAR).

“They kept me for over two years. I was a cook. And they also trained me to fight, which I hated,” Graciela said emotionally. Now, she lives with her grandfather in Bangui, the capital of CAR, back at school and helping other children who have been abused “because I know what it’s like to be alone. To be hurt. And to lose my childhood.”

When Khyata Chauhan stepped up to the microphone, she elaborated how males in India have a higher value than females.

“A child is praised for being a boy, but suppressed for being a girl. Our religious beliefs make girls goddesses – yet we fail to recognize her as a human being…girls are considered a liability,” she asserted, sharing her wish that every child has an education.

As the event wound down, eight-year-old Cooper Megown stood next to the emcees and signed the event, including the introduction of sisters Chloe and Halle Bailey, who opened for ‘Queen Bey’ – megastar Beyoncé – in leading all the children in song that culminated in choruses of For every child in English, Arabic, Chinese, Hindi, Indonesian, Russian, Spanish and French.

In closing, Emcee Jaden said to all the children: “Don’t let the adults off the hook… continue raising your voices.”

A standing ovation at the UN is not an everyday occurrence… but today’s was a most auspicious one.

Children in the spotlight 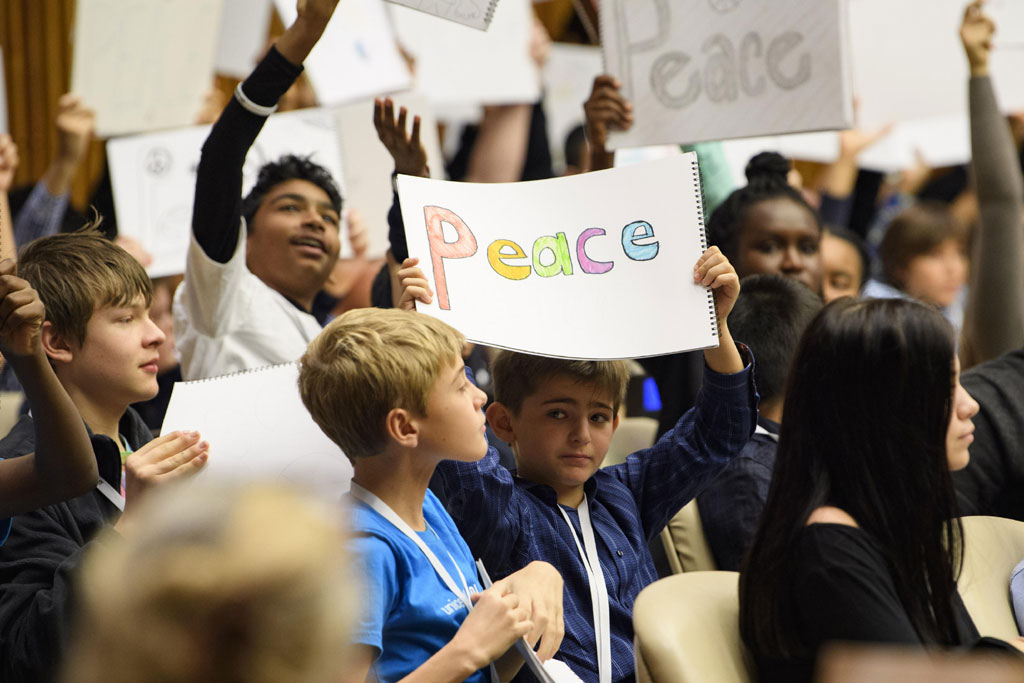 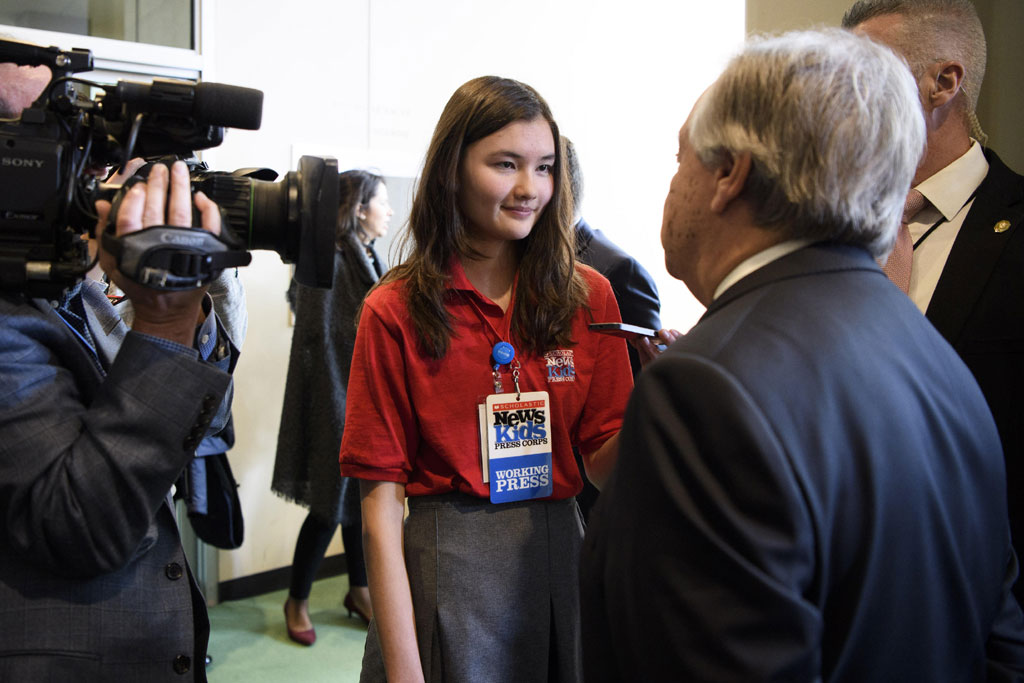 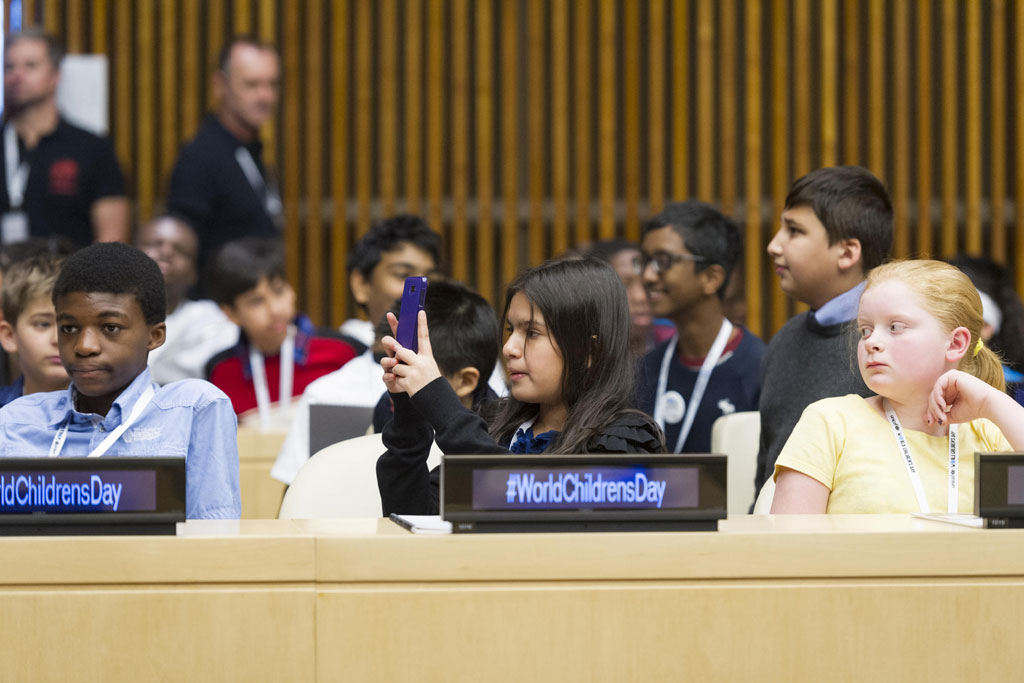 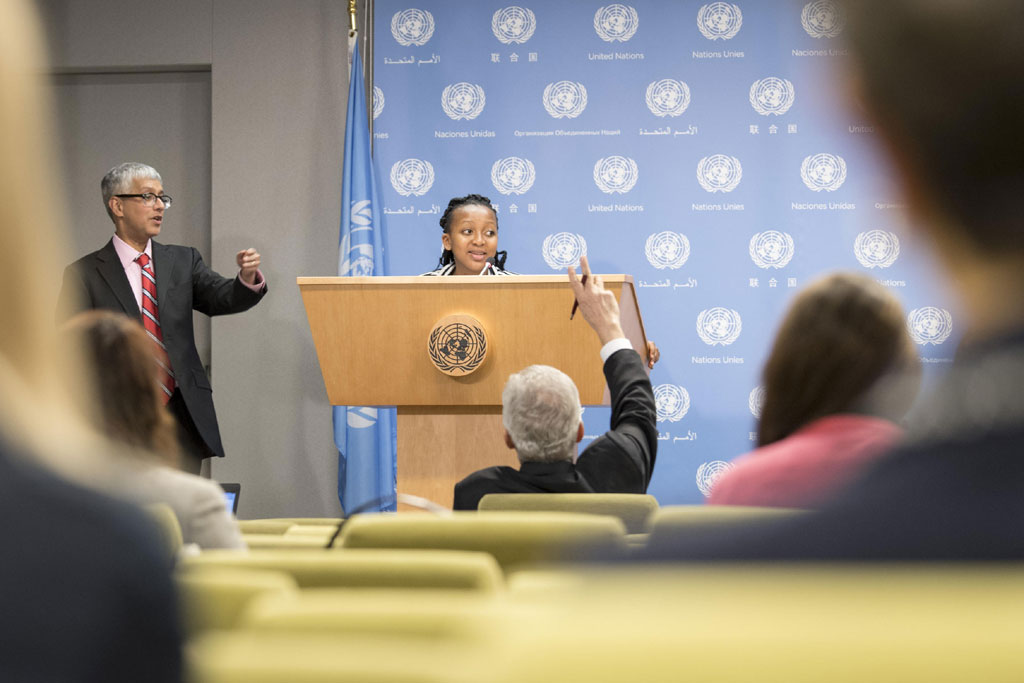 In addition to the main event, children throughout the day, jumping in to adults’ jobs, including as the spokesperson for the Secretary-General and action reporters.

At the same time, UN child rights experts called on all Governments to safeguard children on the move.

“For children on the move, especially when unaccompanied or separated from their families, violence infuses daily life and is often part of a continuum,” said the experts in their massage for the Day.

They said that even when they are forced to flee or be uprooted in search of safety, these children are entitled to grow up in a nurturing family environment, advocating for expeditious family reunification, as called for by the convention on the Rights of the Child.

“Children on the move need to be treated first and foremost as children!” the statement stressed. “Let us respond to the imperative of the Convention to genuinely protect the rights of all children, including those on the move and place their best interests above any other concern,” concluded the experts.

Emmanuel Ford - ‘Nothing is impossible’ for differently abled children

Despite global progress, one in 12 children live in countries with prospects more limited than those of their parents, the United Nations Children's Fund (UNICEF) reported Monday.