Expressing horror at news reports and videos showing African migrants in Libya allegedly being sold as slaves, United Nations Secretary-General António Guterres on Monday called on the authorities to urgently investigate the situation and bring the perpetrators to justice.

“Slavery has no place in our world and these actions are among the most egregious abuses of human rights and may amount to crimes against humanity,” Mr. Guterres told reporters at a press stakeout at the UN Headquarters, in New York, Monday.

He added that he has asked the relevant UN actors to actively pursue the matter.

Mr. Guterres also called on all countries to adopt and apply the UN Convention against Transnational Organized Crime and its protocol on trafficking in persons and I urge the international community to unite in fighting this scourge.

The Protocol against the Smuggling of Migrants by Land, Sea and Air, supplementing the Convention, was adopted by the UN General Assembly in November 2000. It entered into force in January 2004.

It is an important legal instrument that seeks to prevent and combat the smuggling of migrants, as well as to promote cooperation among States Parties, while protecting the rights of smuggled migrants.

Further in his remarks, the UN chief urge the international community to unite in fighting the scourge.

He also called for addressing migration flows in a comprehensive and humane manner, including through the development cooperation among States to address its root causes, meaningful increase of all the opportunities for legal migration, and enhanced international cooperation in cracking down on smugglers and traffickers and protecting the rights of their victims. 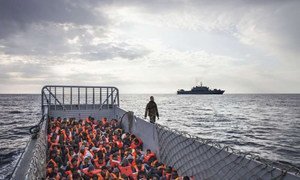