Jose M. Correa/UNDAC
Hurricane Irma cut a path of devastation throughout the Caribbean, including in Punta Alegre, on the north coast of Ciego de Avila, Cuba.
14 November 2017

On the heels of one of the worst – and most costly – Atlantic hurricane seasons on record, a global initiative was launched Tuesday at the United Nations Climate Change Conference (COP23), in Bonn, Germany, of providing insurance to hundreds of millions of vulnerable people by 2020 and to increase the resilience of developing countries against the impacts of climate change.

On the heels of one of the worst – and most costly – Atlantic hurricane seasons on record, a global initiative was launched Tuesday at the United Nations Climate Change Conference (COP23), in Bonn, Germany, with the aim of providing insurance to hundreds of millions of vulnerable people by 2020 and to increase the resilience of developing countries against the impacts of climate change.

In 2017, extreme weather events are estimated to have caused more than $200 billion worth of damage worldwide, as hurricanes, droughts and rising sea levels devastated vulnerable communities with increased frequency and intensity. In the face of skyrocketing costs, new forms of financial protection have become an increasingly urgent part of the climate change discussion.

The InsuResilience Global Partnership is a major scaling-up of an initiative started by the G7 in 2015 under the German Presidency. It aims at meeting the pledge of providing cover and support to an extra 400 million vulnerable people by 2020.

The Global Partnership now brings together G20 countries in partnership with the so called ‘V20’ nations, a group of 49 of the most vulnerable countries including small islands like Fiji, which holds the Presidency of COP23.

“The Global Partnership is a practical response to the needs of those who suffer loss because of climate change,” said the COP23 President and Fijian Prime Minister Frank Bainimarama.

This announcement on climate risk insurance was made a day before the high-level segment of COP23, which Heads of State and Government, Ministers, and UN Secretary-General António Guterres are expected to attend.

Thomas Silberhorn, Parliamentary State Secretary to the German Federal Minister for Economic Cooperation and Development, announced support of 125 million dollar for the new Global Partnership as part of the launch. This follows the £30 million commitment to the initiative made by the British Government in July 2017.

“Climate risk insurance is a response to the simple fact that extreme weather events are constantly increasing in number and intensity, and also a response to our experience that the international community and the countries affected by extreme weather events tend to really act after those incidents occurred and they tend to come too late and to intervene not significantly enough,” Mr. Silberhorn told a press conference.

“So our intention is to act more preemptively, to act in time, and to act decisively in order to reduce the impact of extreme weather events. Insurance is one tool to address this challenge,” he added.

A partnership for climate and disaster risk finance and insurance solutions

The Global Partnership supports data and risk analysis, technical assistance and capacity building according to countries needs and priorities, solutions design of concrete risk finance and insurance solutions, smart support for the implementation for such schemes and monitoring and evaluation efforts.

“This new and higher-ambition initiative represents one shining example of what can be delivered when progressive governments, civil society and the private sector join hands with creativity and determination to provide solutions,” said Patricia Espinosa, Executive Secretary of the UN Climate Change secretariat (UNFCCC).

The Caribbean Catastrophe Risk Insurance Facility (CCRIF), for example, is being supported with the help of ‘InsuResilience.’ The most recent example of support was in September 2017, when more than $55 million was paid out to 10 Caribbean countries within 14 days of hurricanes Irma and Maria, which left an arc of destruction across the region.

The money was used in various ways, for example, to quickly buy urgently needed medicines and to build emergency shelters for the people affected by the storms. 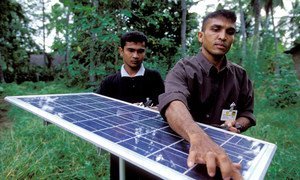 The urgent need to raise the finances to meet the funding goals of the Paris Agreement, especially to support action by developing countries, took center stage Monday at the UN Climate Conference (COP23) in Bonn, Germany.