Nansen Initiative, via UNOCHA
The former village site of Vunidogoloa. The village was forced to relocate inland due to climate change-induced coastal erosion and flooding.
8 November 2017

As the number of people displaced worldwide due to climate change-related events continues to grow, the United Nations and its partners are focusing on regional approaches, framed by existing practice, to respond to the issue of ‘climate refugees.’

The number of disaster displacements on annual average between 2008 and 2016 amounted to 25.3 million, according to figures released by the Norwegian Refugee Council. The five countries globally that have the highest proportion of their population affected by displacements are all island States: Cuba, Fiji, Philippines, Tonga and Sri Lanka.

“During this hurricane season alone for example, we saw the displacement of 1.7 million people in Cuba – that’s the equivalent of 15 per cent of its population,” said Camila Minerva, Humanitarian Programme Manager with Oxfam in the Dominican Republic, during a press conference on ‘human mobility and climate change’ at the UN Climate Conference (COP23), in Bonn, Germany.

“The poorest and the most marginalized are five times more likely to be displaced and to remain so for longer time than people in higher income countries, and [this number] is increasing with climate change,” she added.

Mariam Traore, Migration, Environment and Climate Change Specialist with the UN International Organizaton for Migration (IOM), said that it is also important to remember that the slow onset effect of climate change makes people move and migrate, sometimes in a forced way.

“In a country like Bangladesh, we did a survey last year and 40 per cent of the households we interviewed told us that climate change contributed directly to their decision to migrate,” she explained.

In this context, some have suggested the creation of a 'climate refugee' status, protecting those forced to leave their country because of the impacts of climate change.

“The legals status for refugees is provided by the 1951 Refugee Convention, which is very clear on what [basis such status is conferred], which is basically persecution,” said Marine Franck, Programme Officer (climate change), Division of International Protection, in the Office of the UN High Commissioner for Refugees (UNHCR).

“In the context of climate change displacement, there might be cases where there is persecution involved where this refugee status could apply but in most cases, it doesn’t,” she added.

She recalled that in 2011, States had suggested that UNHCR create a new status of refugee for people displaced because of climate change. “But some States were not at all ready for that,” she stated.

Ms. Franck stressed that this issue of broadening the scope of refugee protection “is not necessarily desirable, because there is a risk of undermining the refugees fleeing persecution and violent conflict.” Moreover, she explained: “We would need also to renegotiate the Convention and there is no appetite for that from States and it might not be the most effective protection tool.”

“It is much more effective because States are going to look at what their neighbours are doing and may adopt the same kind of procedures, rather than if we adopt a global convention or a new category […] it might not be easy to negotiate and it is not also sure that States will then implement it properly,” Ms. Franck said. 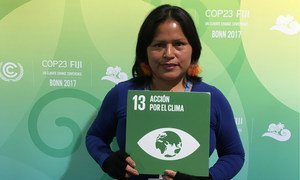 Peruvian indigenous activists at the United Nations Climate Conference (COP 23) in Bonn, Germany, made a strong call Tuesday for indigenous peoples to be part of the solution to tackling climate change, emphasizing their traditional wisdom and practical knowledge about adaptation methods.