Justice must be done for the murder of journalists, who perform important functions in taking forward fundamental freedoms and bolstering the strength of societies, a senior United Nations official said Thursday, marking the International Day to end impunity for crimes against them.

“Justice is a cornerstone of a free society. It dissuades those who threaten freedom of expression and emboldens those who stand to defend it,” said Irina Bokova, the Director-General of the UN Educational, Scientific and Cultural Organization (UNESCO), in her message for the International Day, observed annually on 2 November.

The date was chosen in commemoration of the assassination of two French journalists in Mali on 2 November 2013.

“This is why injustice against journalists is so costly for all societies,” she added.

“We must ensure justice is done for every journalist killed,” she declared.

Journalists must be defended through concerted action by Governments, supported by the UN, working with all relevant actors, from international regional organizations, judiciaries and media to private companies, academia and civil society.

This partnership for action was embodied UNESCO's recent Multi-Stakeholder Consultation, held in Geneva to strengthen implementation of the UN Plan of Action on the Safety of Journalists and the Issue of Impunity.

For his part, UN Secretary-General António Guterres said that when journalists are targeted, societies as a whole also pay the price. Indeed, the kind of news that gets silenced – corruption, conflicts of interest, illegal trafficking – is exactly the kind of information the public needs to know.

The UN General Assembly, Security Council and Human Rights Council have all condemned attacks against journalists and called for ensuring their safety. The United Nations system has also endorsed a Plan of Action on the Safety of Journalists and the Issue of Impunity.

“We are committed to helping to create the environment journalists need to perform their vital work,” said Mr. Guterres, announcing that he is mobilizing a network of focal points from throughout the UN system to propose specific steps to intensify the Organization’s efforts to enhance the safety of journalists and media workers.

On Wednesday in Geneva, two UN experts warned that the world is witnessing a “downward spiral of attacks” on journalists, spurred on by hate speech even from senior politicians.

Speaking on the eve of International Day, the Special Rapporteurs on arbitrary, summary and extrajudicial executions, Agnes Callamard, and on freedom of expression, David Kaye, said that when authorities fail to follow up such attacks with independent and impartial investigations, the killers and their allies achieve their objectives.

The attacks need to stop, so too does the public demonization of reporting and specific media outlets and reporters by political leaders at the highest levels, they added.

Killings of journalists up 50 per cent in 2022: UNESCO 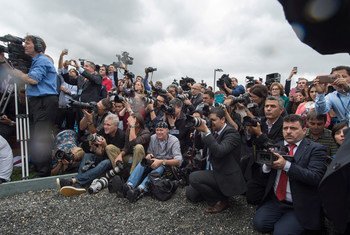 18 July 2017
The head of the United Nations agency tasked with defending press freedom today called for an investigation into the recent murder of a Honduran journalist in Mexico.