The Islamic State of Iraq and the Levant (ISIL or D'aesh) may be largely pushed out of Syria's Raqqa governorate, but after years of oppression and nearly a year of intense fighting – marked recently by heavy airstrikes – humanitarian needs will continue to be large for some time, the top United Nations relief official told the Security Council Monday.

“Since the beginning of the anti-ISIL offensive in November last year, airstrikes and clashes have resulted in more than 436,000 people being displaced from Raqqa to 60 different locations, including in neighbouring governorates,” UN Emergency Relief Coordinator said briefing the Council via videoconference from Amman, Jordan.

“One conclusion is obvious: the impact of the Syria crisis continues to be profound.”

Expressing deep worry about the impact of fighting and airstrikes on civilians and civilian infrastructure in Raqqa governorate, with scores of civilians reportedly killed in recent months, he said he is also concerned for the safety and protection of civilians at risk from unexploded ordinance throughout Raqqa city, particularly those trying to return to their homes.

“Despite the directive issued by local authorities for civilians not to return to the city until it is deemed safe, the UN anticipates that people will go back to try to check on and protect their homes and their personal assets,” Mr. Lowcock explained.

Further to the east, in Deir Ez-Zor governorate, heavy fighting and airstrikes continue to result in civilian deaths and injuries. Large-scale displacement also continues, with the UN International Organization for Migration (IOM) reporting some 350,000 people displaced since August, including more than 250,000 people in October alone.

As for eastern Ghouta, Mr. Lowcock said daily shelling has continued to be reported in recent weeks. Humanitarian access to eastern Ghouta – one of the four de-escalated areas where nearly 95 per cent of Syria's besieged population lives – has been severely curtailed for months. Since the start of the year 110,000 people have received food assistance, out of an estimated population of nearly 400,000.

“Today the UN and partners delivered food, nutrition and health assistance to 40,000 people, he told the Council, warning however that an alarming number of child malnutrition cases have been recorded there, and more than 400 people with health problems require medical evacuation.

Overall, he said that more than 13 million people inside Syria still need humanitarian assistance. 6.3 million of them are exceptionally vulnerable and in acute need because of displacement, hostilities, and limited access to basic goods and services. “Conflict and violations of international humanitarian law continue to be the principal drivers of humanitarian need, with civilians in many parts of the country enduring massive suffering.”

Conflict and violations of international humanitarian law continue to be the principal drivers of humanitarian need, with civilians in many parts of the country enduring massive suffering.

“Against this background, the UN and our partners continue to implement in Syria one of the largest humanitarian operations in the world,” said Mr. Lowcock who is the UN Under-Secretary-General for Coordination of Humanitarian Affairs, noting, by example that in September, the World Food Programme (WFP) provided food assistance to more than 3.3 million people, the UN Children's Fund (UNICEF) reached over 1.5 million people, and the World health Organization (WHO) reached over 800,000 people.

He also went on to point out that cross-border assistance provided for in last year's Council resolution 2165 “has been a lifeline,” allowing the UN to reach millions of people in need in northern and southern parts of Syria. On average, aid was delivered to 2.76 million people a month through cross-border operations between January and August of this year.

“Our experience with cross-line operations from within Syria […] leads us to believe that it would be impossible to reach those people in a sustained manner from within Syria. I therefore regard a renewal of resolution 2165 as essential. Millions of people depend on the activities it mandates,” he underscored. 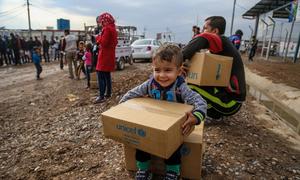 Winter may be 'harsh blow' to vulnerable children in Middle East, UNICEF warns amid funding gap

Freezing temperatures, storms and heavy snowfall will add to the misery afflicting hundreds of thousands of families affected by conflict across the Middle East unless assistance – including cold weather clothing and supplies – is urgently provided, the United Nations Children's Fund (UNICEF) has warned.