On the third day of his visit to the Central African Republic (CAR), United Nations Secretary-General António Guterres on Thursday called on the international community to support the conflict-ravaged country’s peacebuilding and recovery strategy.

“There must be resources available for this country to have the solidarity it deserves to ensure its citizens a dignified life, and to ensure that government projects turn into a reality of peace, stability and prosperity,” Mr. Guterres told reporters in the nation’s capital, Bangui, following a meeting on the country’s plan regarding disarmament, demobilization and reintegration of former combatants and the security sector reform.

The Secretary-General saluted President Faustin-Archange Touadéra and his Government’s efforts to consolidate peace in the country and pledged the UN’s support to the extension of national institutions.

The UN chief highlighted the four linked components – security, State-building, national reconciliation and development – that shape the country’s vision for peacebuilding and recovery.

On the security front, Mr. Guterres noted that the UN Security Council has been asked to strengthen the capacity of its peacekeeping mission, known by its French acronym, MINUSCA, and its operational capacity to better protect civilians in the CAR.

Also in the other areas, the UN supports the Government’s projects, he said, stressing the importance of national ownership of those programmes.

The Secretary-General also called on armed groups to lay down their weapons so that they can participate in the political process of the country.

Noting that almost all religious conflicts he knows are caused by political manipulation, Mr. Guterres urged political, community and religious leaders in CAR to work towards true national reconciliation.

“Central African religious communities – Christians, Muslims and others – have always lived together,” he said. “It is imperative that political leaders, leaders of armed groups and community religious leaders call for genuine reconciliation, mutual respect, and the understanding that everyone must live together to build the new Central African Republic.”

In that regard, the international community must play its role. “We cannot leave the Central Africans abandoned. Everyone needs to be mobilized to help this country build a future that Central Africans deserve,” he emphasized. 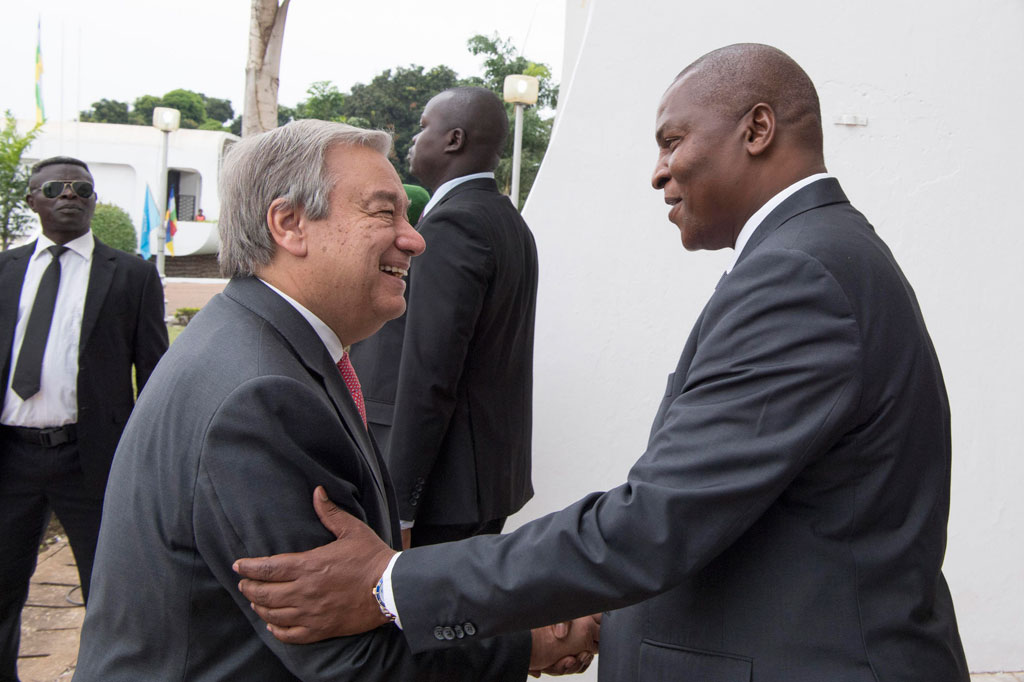 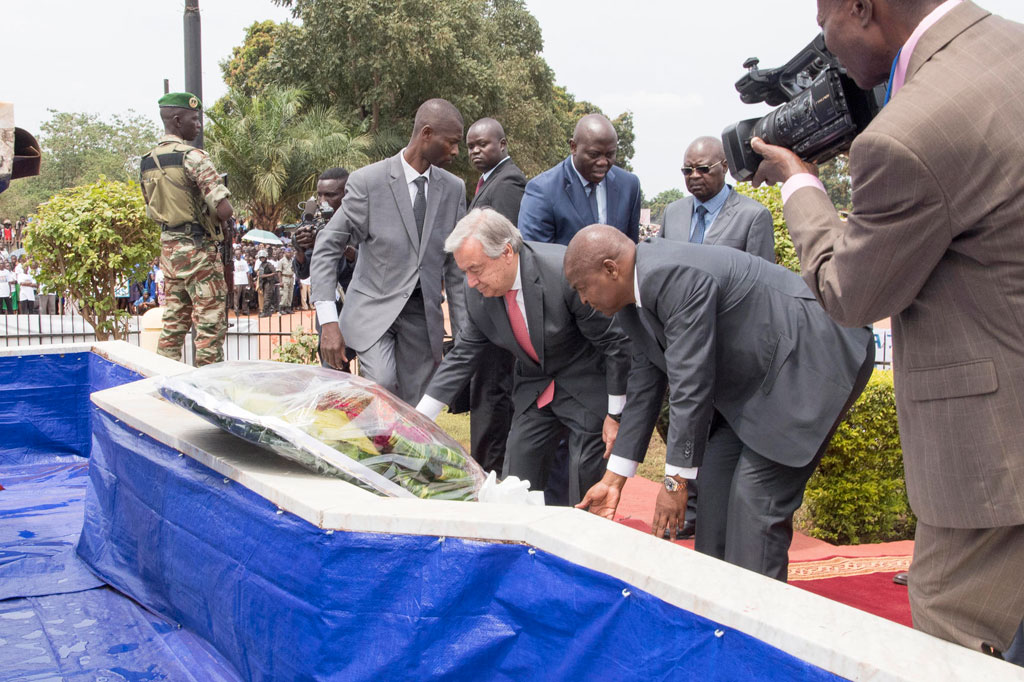 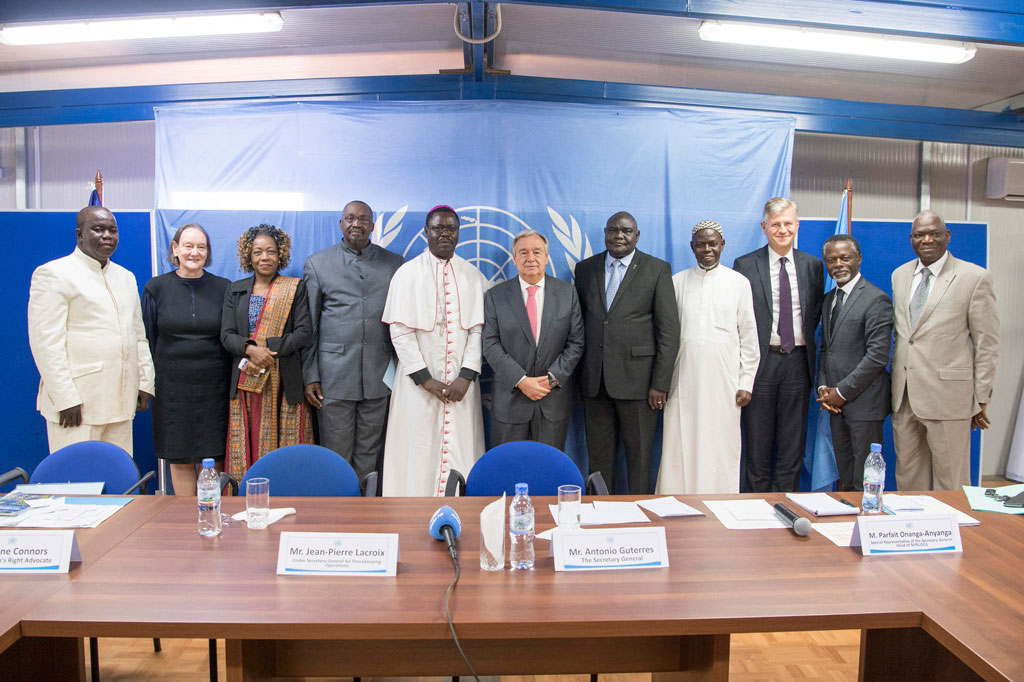 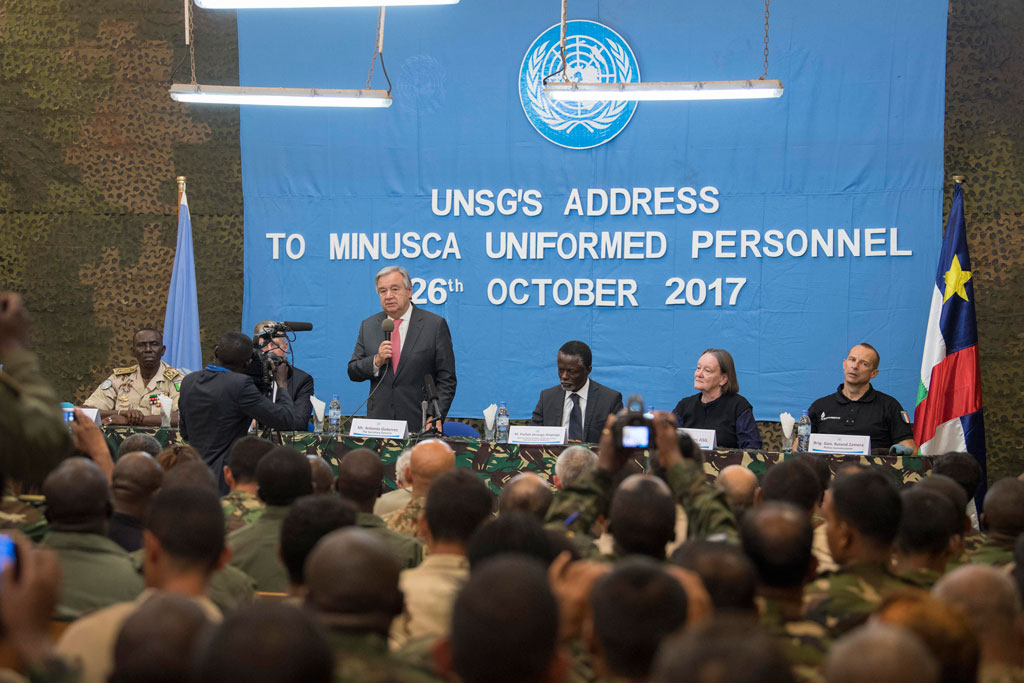 Secretary General Antonio Guterres at a large-scale meeting with the military and police components of MINUSCA at the UN Military Contingent Base in Central African Republic. UN Photo/Eskinder Debebe 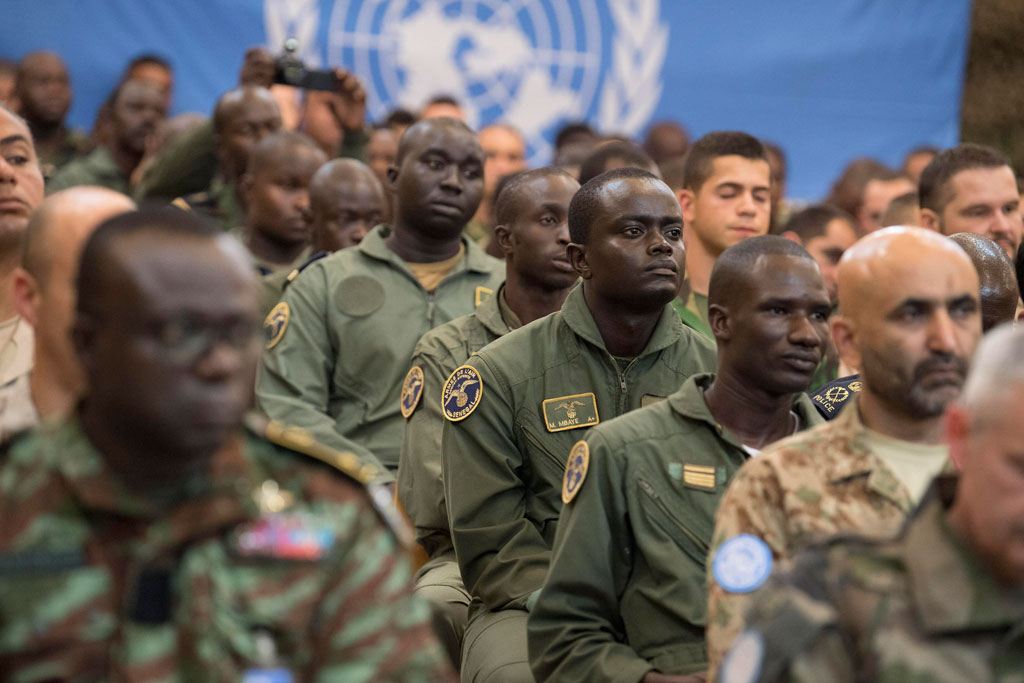 Among other activities, the UN chief met with ambassadors from the African Union and the Economic Community of Central African States, at the UN Mission headquarters.

He then had a separate meeting with local religious leaders and civil society leaders, telling them how much the CAR needs a strong and vibrant civil society.

Mr. Guterres also reiterated his zero-tolerance for any sexual abuse or exploitation by UN personnel as he outlined his new approach, including a closer partnership with troop-contributing countries. He also introduced to them Jane Connors, the new Victims’ Rights Advocate, who is accompanying him.

The Secretary-General then met with representatives of political parties. He told them that the current situation in the country can only be solved with a political solution, which cannot be imposed from the outside.

Mr. Guterres was then briefed by the European Union on its training mission of the armed forces of the CAR.

He also held a meeting with over 100 members of the UN military and police contingents at M’poko airport. In his discussion, the Secretary-General told them of his pride of being their colleague and for the work they are doing for the people of CAR. He also stressed that the UN’s conduct in the country must be exemplary and that as UN staff need to protect vulnerable populations and their human rights.

On the second day of his visit to the Central African Republic (CAR), United Nations Secretary-General António Guterres on Wednesday called on the international community to show solidarity in helping the crisis-torn country chart a new future while warning against religious divide.