Secretary-General António Guterres and the United Nations Security Council have condemned yesterday's attacks in Afghanistan's Paktya and Ghazni provinces, which left many dead and injured.

“He extends his deepest condolences to the families of the victims and wishes a speedy recovery to those injured. He expresses his solidarity with the people and the Government of Afghanistan,” according to a statement issued Wednesday by UN Spokesman Stéphane Dujarric.

“Such attacks are violations of human rights and international humanitarian law and can never be justified,” the statement added.

For its part, the UN Security Council strongly condemned what it called “a wave of terrorist attacks” that killed at least 70 people and injured more than 200 across the country.

“The members of the Security Council condemn in the strongest terms the heinous and cowardly terrorist attacks that took place in Paktia, Ghazni and Kabul,” said a press statement issued by the 15-member body on Tuesday.

The Taliban has claimed responsibility for the attacks that reportedly targeted police and Government facilities across the country.

The Council also reaffirmed that terrorism in all its forms and manifestations constitutes one of the most serious threats to international peace and security and that all States need to combat such threats by all means.

The Council also underlined the need to bring perpetrators, organizers, financiers and sponsors of these acts to justice, urging all States to cooperate actively with the Government of Afghanistan and all other relevant authorities in this regard.

The Council expressed its deepest sympathy and condolences to the families of the victims and to the Government of Afghanistan and wished a speedy and full recovery to those who were injured. 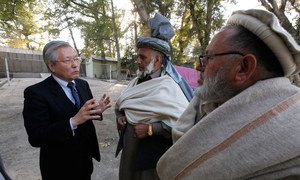 Although efforts over the past few years to reach a political solution to the Afghan conflict have led to little progress, the top United Nations envoy in the country today reported a renewed interest in political engagements for peace.