Africa must focus on young people, empower women and girls, and be innovative in leveraging resources and financing for development, Secretary-General António Guterres said Monday as the United Nations kicked off Africa Week.

“Africa Week is to raise awareness and mobilize support. I am convinced that, together, we can meet the challenges,” Mr. Guterres said in his remarks to the high-level inaugural event at UN Headquarters in New York.

The Secretary-General said the international community must change the way it looks at the African continent.

“Africa is a land of resilience, and above all, it is a land of opportunity,” he emphasized, highlighting the continent’s recent progress in reducing poverty, diversifying its economies, building the middle class and nurturing growth in a variety of sectors.

To further unleash such potential, he said, young people must play a central role as Africa has the fastest growing youth population in the world.

“We can help make the most of this demographic dividend through greater investments in education, especially in science and technology and by ensuring to enable youth participation in economic development. People need skills that match the needs of today and tomorrow,” he said.

Empowering Africa’s women and girls is also crucial, as gender inequality is costing sub-Saharan Africa tens of billions of dollars a year, like everywhere else in the world.

Another key is to be innovative in leveraging resources and financing for development, including tax reform by African countries themselves and international efforts to fight tax evasion, money laundering and the illicit financial flows that have depleted Africa’s resource base, he added.

Also addressing the inaugural event was UN General Assembly President Miroslav Lajčák, who said that in the past, Africa was expected to listen, and accept the ideas and conditions of others.

“That era is over […] When it comes to its own development, Africa now has the most powerful voice of all. We need to listen to it, and learn from it,” he said.

Among other priorities, he stressed the importance of cooperation between the African Union (AU) and the UN, particularly in the area of sustainable development. The AU’s ‘Agenda 2063’ and the UN’s 2030 Agenda for Sustainable Development both outline a sustainable future for the planet and the people.

“They must be implemented in complementarity,” he said, noting that better and more regular engagement between the two entities is necessary at all stages, including planning, implementation, financing and review.

The events during Africa Week centre around the theme: ‘Supporting an Integrated, Prosperous, People-Centred and Peaceful Africa: Towards the Implementation of Agenda 2063 and the 2030 Agenda for Sustainable Development.’ 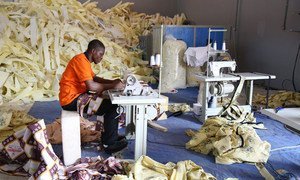 While much of Africa has achieved impressive economic growth, United Nations officials today encouraged countries on the continent to take further action to advance inclusive and sustainable industrial development.